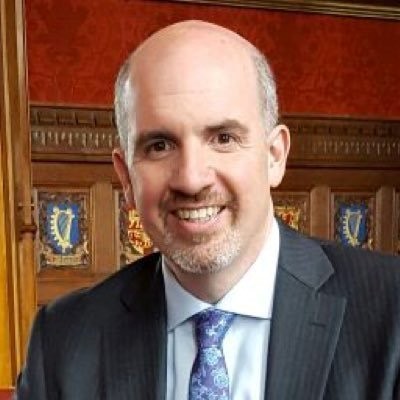 Thom Brooks is an award-winning author, columnist, policy advisor and public speaker. He appears frequently on television, radio and in print media discussing immigration & citizenship, Brexit ‘Brexpert’ and “the man behind Remain and Leave” vote, British politics, punishment & sentencing, US politics and other topics as a highly sought after commentator and expert. His general research interests are in ethics, law and public policy.

As inaugural Dean of Durham Law School at Durham University, he is leading the biggest growth in the School’s 50 year history increasing academic staff from 42 to 75+ over the next few years – building new critical mass in key areas, improving our research capacities, expanding into new areas like Chinese law launching the ground-breaking Centre for Chinese Law and Policy already one of the largest in Europe starting the first ever Chinese law summer school in the UK. The Times noted the new programme at Durham will offer “great career prospects” above and beyond other British law schools in a special feature. The Law School’s growth will further reduce our staff-student ratio and retaining Durham’s small group tutorials of 6-8 students and seminar teaching at the heart of our enriching student experience. Brooks introduced the first on-site teaching for the New York and California state bar exams in partnership with BARBRI delivered at no other UK law school. He has become known for driving the global diversity of programmes to reflect the global diversity of today’s students and academic to boost research and employability.

Durham Law ranked 3rd in the UK in the most recent Research Excellence Framework. Durham also ranks in top three best law schools for law student employability: more Durham graduates get jobs in the City and London than any London law school. In 2017, Durham Law School achieved its best ever results reaching 40th in QS World Rankings and 93% overall satisfaction in the National Student Survey. These achievements were recognised by the House of Commons in Early Day Motion 875 in Parliament. Durham University is the third oldest university in England and situated in a UNESCO World Heritage Site – Durham Castle is one of the university’s colleges. Brooks has stood in for the Vice-Chancellor representing Durham University abroad and serves on several senior working groups and committees covering workload models, an effectiveness review of academic boards of studies, a review into academic administrative workload and several senior appointment panels. Brooks chairs a University-wide working group on non-staff budget allocations. He sits on the BARBRI SQE Advisory Board where he advises on addressing changes in the regulatory framework for qualifying solicitors. He also sits on the project panel for the Employers Social Mobility Alliance. He features in Hogan Lovells’ Graduate Recruitment Brochure for 2018 and 2019.

Brooks is an immigration law and policy specialist with wide-ranging expertise. He is “the UK’s leading expert” on Britain’s the Life in the UK citizenship test and the author of the only comprehensive report examining it (brief, report, video). This is frequently highlighted in Parliamentary debates and noted in the media worldwide as well as leading law firms. His latest book is Becoming British and published last year by Biteback. Brooks contributed to the All-Party Parliamentary Group on Social Integration’s report into the integration of immigrants, especially on issues of EU free movement restrictions, improving the UK citizenship test and integration strategy. Brooks gave evidence to the House of Lords Select Committee on Citizenship and Civic Engagement and its final report lists 7 recommendations by Brooks on revising English requirements, an overhaul of the UK citizenship test, launching a new advisory group and much more — he is the most cited person in the 168 page report. He is well known for arguing the UK’s citizenship test is “like a bad quiz” – a view repeated in global media since 2013, discussed in Parliament and supported by the Home Secretary Sajid Javid. He has also supplied written evidence to the Home Affairs Select Committee on why preparations for a No Deal Brexit are inadequate. His evidence to the Law Commission on how to simplify the current immigration rules and improve their effectiveness was used in support of most of the Commission’s recommendations to government.

Brooks is active in the UK’s Labour Party as a member and advisor. He is quoted in Labour’s policy commission that led to its 2015 campaign manifesto and he advised on Labour’s ground-breaking 2017 election manifesto rejecting arbitrary targets, reinstating a migration impacts fund, launching an evidence-based review of existing immigration policies and more action on refugees. He continues to advise Labour on immigration and he advocates for a number of policies, including: the need for an Advisory Group on citizenship and immigration, Migration Impacts Reduction Fund, revised citizenship test and a focus on impacts instead of net migration targets. Brooks’s research has helped expose serious flaws in the government’s immigration policies, including that new checks introduced by the Government’s ‘hostile environment’ to expose unknown migrants unlawfully in the UK has failed to identify a single individual, that the Government earns surpluses of up to 900% from immigration fees with much of this spent on non-immigration areas, that the Immigration Health Surcharge paid by migrants to allegedly offset expected costs to their local NHS are not actually earmarked for their local NHS authority and Brooks broke the story about a previously unknown Home Office form for spouses to report ex-partners for deportation uncovering it had received no risk assessment, been part of any formal consultation and no forms received.

Motivated to learn about immigration from his personal experience as a migrant and naturalised British citizen, Brooks has supported hundreds of migrants and citizens looking for information about migration for over two decades in the UK and abroad. He regularly delivers public lectures and seminars to improve the public’s understanding of migration issues, challenging common misperceptions and a leading national advocate for more progressive policies. He advises the award-winning BBC One drama “Call the Midwife” and the BBC One programme “Rip Off Britain” on immigration-matters.

Brooks is one of the UK’s top commentators on Brexit playing key parts in the debate from its start. In a public consultation on the EU Referendum wording, Brooks argued that it should be changed to remove bias and ensure consistency with recent constitutional-related referenda. The Electoral Commission agreed and quotes Brooks in support of this change in their final report which was accepted by the government and approved by Parliament. Brooks is one of the leading critics of the government’s strategy for Brexit – and claimed before Article 50 was triggered that the government would not implement Brexit by 29 March 2019 — a prediction that came true. He has raised serious doubts about whether Brexit is necessary to achieve immigration targets in a column for The Times and whether Brexit will lead to any substantial change – his views are widely covered by the national and international media. Brooks was the first to point out that the recent drop in net migration was not a policy success for government, but driven by a weak economy and uncertainty over Brexit – with an increasing number of British citizens choosing to leave the UK helping fuel lower migration figures. Brooks has been the Sky News’s “Brexpert” and that ITV called “the man behind Remain and Leave”.

Brooks is a Fellow of the Academy of Social Science (FAcSS), the Royal Historical Society (FRHisS), the Royal Society of Arts (FRSA) and the Higher Education Academy (FHEA). He was invited for inclusion in Debrett’s People of Today since 2016 and Who’s Who since 2019. He won a Faculty Award for Outstanding Contribution to Media from Durham University in 2013 and Lecturer of the Year for his faculty from Durham University’s Student Union in 2014, Law Teacher of the Year from Durham Law School in 2015, Durham University’s Excellence in Learning and Teaching Award in 2016, runner-up for the Inspirational Academic Award from Durham Students’ Union and shortlisted for Law Teacher of the Year from the Northern Law Awards in 2015. His book Punishment was named ‘Book of the Month’ by the European Sociological Association. Brooks is the recipient of the 2017 Distinguished Alumnus Award from Arizona State University’s School of Politics and Global Studies.