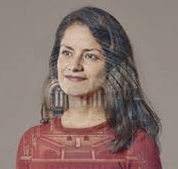 I am an anthropologist and specialise in the study of religion, particularly of Christianity, and its relation to other aspects of social life such as kinship, gender, political and economic relations. I have particular expertise in the study of Pentecostalism in the Republic of Benin, West Africa, and of ‘Popular’ Catholicism in the Huasteca region in Mexico. I studied my first degree in Ethnohistory at the National School of Anthropology and History (ENAH) in Mexico. I completed my postgraduate education at the London School of Economics (LSE), where I did an MSc in Anthropology and Development and a PhD in Anthropology.

My first ethnographic research in Mexico focused on the study of a prophetic-millenarian movement, with a female charismatic leadership, among the Nahua - an indigenous group in the Huasteca region of Veracruz. This work was published in 2008 by the Centre for Research and Advanced Studies in Social Anthropology (CIESAS). My interest in the study of religion from a cross-cultural perspective led me to pursue my doctoral dissertation in the Benin Republic in West Africa, where I focused on the study of Pentecostalism. This research, which I am currently developing into a monograph, consisted on an ethnographic exploration of the ways in which conversion to Pentecostalism contributes to redefining some of the principles of kinship and gender relations in a patrilineal society. This research explored how, in a context of ethnic and religious diversity, ruptures in people’s personal relationships associated with conversion to Pentecostalism are accommodated and made sense of in kinship and other social networks. I have become increasingly interested in developing networks of academic cooperation with scholars working in Africa and in Latin America with Afro-descendant populations, on topics relevant to both continents in the study of religion.