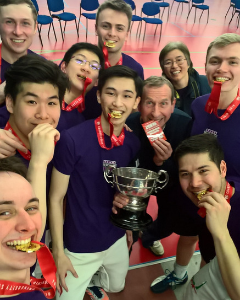 Durham University Fencing Club has a long-standing reputation for being one of the leading programmes in British University Sport, and is currently the #1 university fencing club in the country.

The club boasts the only purpose-built university fencing salle in the UK, with four permanent metal pistes, four training pistes, and one wheelchair fencing frame. In addition to phenomenal facilities, Durham also has a top-class training programme. Club sessions are run by head coach Laszlo Jakab, who has coached athletes to become Olympic, Commonwealth, and National Champions in all three weapons. Assistant coach Stewart Watson has also returned from a stint as performance director for Singapore Fencing, and similarly offers one-to-one lessons. In addition to training, team fencers can also take part in Strength and Conditioning sessions, run by the University’s Performance Sport Programme.

The club’s top teams are regular winners of BUCS, a competitive league in the UK comparable to the NCAA. BUCS takes place throughout the year in both a League and knockout Cup format. Both 1st teams were BUCS Champions in 2020, a title now claimed by the men’s team 4 times. The men’s 1st team has also reached the finals of the Cup for 4 years of the last 5, and the women’s 1st team for 3. The club won three gold medals at the BUCS National Individual Championships 2020, two of which were by members of our women’s 1st team.

The talent that we have attracted is testament to the strength of our programme. Many of our performance fencers have represented their nations at World and European Championships, Commonwealth, Pan American, and Central American games. Central American Champion Ivania Carballo won gold for a sixth time in 2019 during her Master’s degree at Durham. In 2020, we were joined by Junior World Champion Lorenzo Roma, and in the following year, U17 Wheelchair Fencing Champion Josh Waddell.

American Champion Ivania Carballo won gold for a sixth time in 2019 during her Master’s degree at Durham. In 2020, we were joined by Junior World Champion Lorenzo Roma, and in the following year, U17 Wheelchair Fencing Champion Josh Waddell.

Our fencers have also gone on to be selected for high profile organisations and competitions. After graduating, Tommy Curran-Jones was appointed Director of British Fencing in 2018. Durham alumna Gemma Collis-McCann went on to compete in the 2012 and 2016 Paralympics, and also became the first British woman to win a Wheelchair Fencing World Cup. More recently, she qualified for the Tokyo 2020 Olympics. Performance scholar Barnaby Halliwell was selected to represent Great Britain at the Senior European Fencing Championships in 2021, and was named BUCS Sportsman of the Year at the 2021 BUCS Awards. Alumnus Eli Schenkel also qualified to compete at the Olympics in Tokyo, representing Canada.

Scholarships are available for top-level athletes.

The club also boasts a thriving beginner’s programme offering an excellent introduction to fencing and wider club life. Although we offer specific taster sessions at certain times of the year, everyone is welcome to join our beginner’s session. Fencers can join our development teams, which, like over performance teams, compete against other universities in BUCS leagues. Our development teams consistently medal in both the League and Cup. In 2018, our women’s 2nd and 3rd teams earned gold and silver medals in the Northern Conference Cup, respectively. Our men’s 2nd team earned a silver medal in the League, whilst the men’s 3rd team earned bronze in both the League and Cup. Our 4th teams came 4th on the women’s side, and 1st on the men’s side. In 2019, our women’s 3rd team earned a silver medal in the Northern Conference Cup, and, in 2020, our men’s 3rd team achieved gold in both the Cup and the League. Our development fencers have also enjoyed a lot of success at competitions across the UK, such as the BUCS Fencing Development Series, Stirling Sword, and the North East Regional Championships, the latter of which we hosted in 2020.

Whether you’re a beginner or an international athlete, get in touch and see what we have to offer!