We are currently working on creating the University art collection publically accessible through Discover and opening up access to the collection through talks, tours, exhibitions and events, as well as using the collection as a key primary resource for teaching and research within the university and regional schools. In the meantime you can see a selection of the collection highlights here. We will be adding more to this page over the next few months so do check back.

The University is home to one of the richest cultural collections in the North East, including Asian art, modern art, manuscripts and archives. The collection of modern art alone presents work by some of the most significant artists of the twentieth and twenty-first centuries and specialises in print based materials. The variety of print-based artworks makes the collection an invaluable resource for investigating different printing techniques, from early methods of woodcut printing to more contemporary screen and digital printing techniques. The notion of the multiple print as a primary artwork is one that is frequently contested or misinterpreted and the collection can be seen as a unique resource in considering this notion and in investigating the different means of printing and their status.

Sandra Blow was one of the leading lights of the abstract art movement of the 1950s. Her works are often on a large scale and consist of abstract collages. Blow pioneered new processes of working with cheap discarded materials such as sawdust, cut-out strips of old canvas, plaster and torn paper. In this print, it is possible to see the texture of the original canvas which was used to create this work. 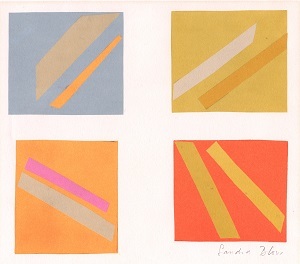 These are unauthorised prints produced by the Belgian collective Sunday B. Morning, copied from a series original by Andy Warhol. In 1970, Warhol gave Sunday B. Morning the original photo-negatives and colour codes needed to produce these prints. However, Warhol then changed his mind and he tried – unsuccessfully – to stop their production. When he subsequently came across one of these Sunday B. Morning prints he signed it ‘This is Not By Me. Andy Warhol’, to ‘negate’ them. This series is not signed. 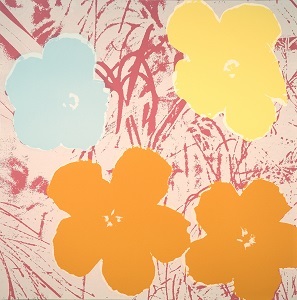 Marina Abramović is a performance artist, writer, and filmmaker. Her four-decade long career has examined the physical and mental boundaries of human experience, and the tensions between male and female physicality and mind. Abramović has repeatedly rejected the notion that she is a feminist artist, a reflection of her rejection of all labels - except one - the artist. ‘Art is or has to be universal… A woman does not have to be a feminist, even if she opens doors for other women; a woman artist should not be expected to make feminist art.’ 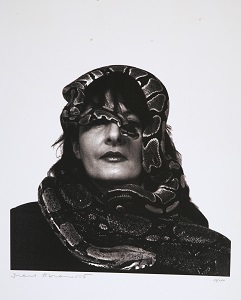 “When you really understand that each colour is changed by a changed environment, you eventually find that you have learned about life as well as about colour."

Josef Albers (1888-1976) was an instrumental abstract artist and colour theorist born in Bottrop, Germany who began his art career at The Bauhaus. After its closure in 1933, Albers relocated to America where he combined his love for ‘Hard Edge’ American abstract paintings with the traditional European style. There he became a prominent figure teaching artists such as Ray Johnson and Robert Rauschenberg.

He is best known for his work Homage to the Square which he began in 1950. This saw hundreds of paintings and prints of nestled squares where he was able to look at colours and chromatic interactions. 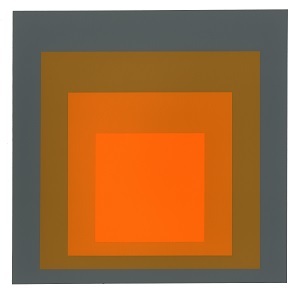 Sol LeWitt (1928-2007) was a conceptual artist born in Connecticut who rose to fame for his wall drawings and sculptures he called structures. He began his career as a graphic designer before working at the Museum of Modern Art, where he met artists such as Josef Albers and Robert Rauschenberg. Influenced by the cube, he began by noting clear instructions so others could execute the designs. He created 1,200 works like this, making him different from other artists of his time. The structures he created were variations of geometric shapes constructed from a variety of materials such as concrete and steel. 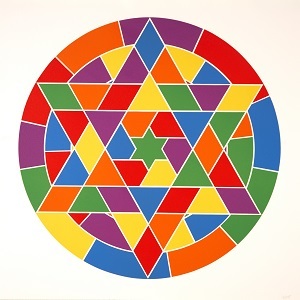 Terry Frost (1915-2003) was a British abstract artist who did not produce work until he was into his thirties. During World War II, he was held in several prisoner of war camps where he met Adrian Heath who encouraged him to paint. On his return, he enlisted in the Camberwell School of Art where he studied under prominent painters Ben Nicholson and William Coldstream.

Using the Cornish landscape, he incorporated coastlines, boats, sails, waves and the sun as the foundation of his work between abstraction and figuration. His most famous works include Black and White Movement and Tree, Tree. 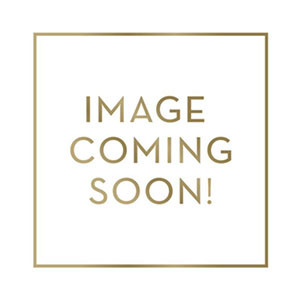 Lady Kitt is an artist, activist, performer and researcher. Portraits in Kitt’s Worth series depict strong and influential women through cutting hearts out of £50 banknotes. This image is a portrait of Professor Charlotte Roberts, Professor of Archaeology at Durham University. By depicting inspirational women from all walks of life, Kitt hopes the exhibition will highlight the areas in which women are still underrepresented and discriminated against. 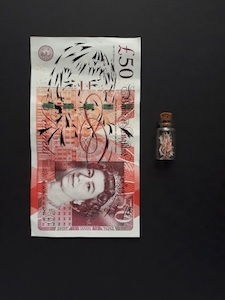 Elisabeth Frink was a sculptor, whose imaginative world was heavily influenced by the Second World War. Her earliest drawings revealed the perspective of a young girl who had witnessed appalling violence; wounded birds, apocalyptic horses and riders, and falling men, populated her art. Working in a post-war world of male sculptors, Frink rejected any calls for her to ‘feminise’ her creative practice, instead tackling themes of power and fragility head on.

© The Elisabeth Frink Estate and Archive. All Rights Reserved, DACS 2019. 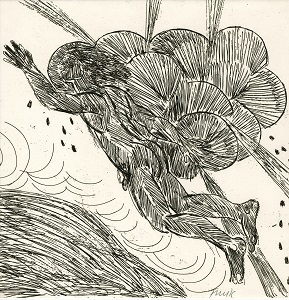 The Summoner’s Prologue from The Canterbury Tales

Enid Marx was a pioneering textile designer, printmaker and illustrator. Marx and her peers believed that art should be brought out of the art gallery and into the lives of ordinary people through applied design, and although her Royal College of Art diploma artwork was failed as being ‘too abstract’, Marx went on to become the first women to be named a Royal Designer for Industry. Marx’s designs have become iconic; from her London underground fabrics, to Penguin book covers, to the stamps for Queen Elizabeth II’s coronation.

Paula Rego was born and raised in Portugal. Many of her works, such as Young Predators, are inspired by folklore and investigate the role played by women (or girls) in such stories. Other works by Rego reference activism and power. In 1998, the artist created a series called Untitled. The Abortion Pastels. in response to a referendum to legalise abortion in Portugal, which was narrowly defeated. Rego was enraged at her country’s refusal to face the true experiences of women.

Jo Stanness often uses the brutalist and modernist architecture of the North-East as a central element in her work. Dunelm House and Apollo Pavilion are architectural cut-outs, part of a series of works the artist began in 2015.Initially drawn to the clean lines and geometry of brutalist architecture, the artist found their surrounding urban landscape untrue to their intended form.

Stanness began instead to create her own compositions; ‘Architecture can slice through and divide up physical space; I am interested in using images of structures or elements of buildings as a catalyst for the division of pictorial space.’ In this work she followed one simple self-imposed rule; ‘I only follow or extend lines and angles which already exist within the photographic image. ’ Using this method, Stanness relates the physicality of architecture to three-dimensional drawing in the landscape. 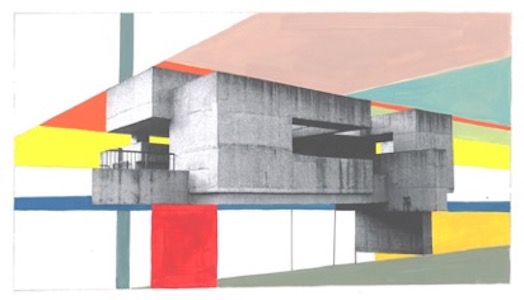 A collabrotion between artist Stuart Langley and Curious Arts, the 36point7 project reimagines the World AIDS Day charity ribbon worn by many, increasing its distinctiveness and ensuring visibility for the millions of people living with HIV/AIDS across the world.

Stuart Langley is an artist currently based in Hartlepool. He works with light and colour, making use of waste materials to create sculptural artworks and installations, encouraging the viewer to hunt for the potential in the everyday. Curious Arts are a Newcastle Gateshead based not-for-profit organisation developing LGBTQ arts, artists and audiences across the North East of England. Their work celebrates and explores Lesbian, Gay, Bisexual, Transgender and Queer Culture. 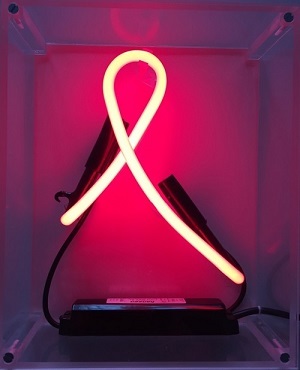 Craig Oldham is a designer whose work crosses the boundaries of fine art and digital practice. He is particularly interested in the hand-drawn or hand-written as a means of overcoming the depersonalisation of email and automated communication. The artist is fascinated by the primal nature of drawing as one of the earliest forms of representation. From a young age, the artist morphed his instinct to draw into the manifestation of words, as a method of exploring ideas.

Never Forgive Never Forget recreates a protest placard in a type face known as LIAISON. The for is inspired by the ‘Liaison Committee for the Defense of The Trade Union’ (LCDTU) placards which were distributed throughout the UK Miners’ Strike 1984-1985. The print demonstrates Oldham's technique of drawing with words.

Michael Mulvihill’s work examines the way nuclear weapons have influenced and structured the way we experience our social and cultural environment. Growing up in South Shields during the 1970s and 1980s, Mulvihill has vivid memories of the nuclear threat and the ‘four minute warning’- the public alert system conceived during the Cold War.

The Means & the Instruments series (2013-15), are representations of the North Sea coast. It is an area that has long been heavily militarised for defence against invasion from the sea. The drawings are hand-drawn by the artist on a miniature scale. The scenes portrayed in the images show landscapes and buildings - often disguised as domestic houses - that were used by the intelligence agencies for military operations. The small size of the drawings is a play between the seen and unseen, the hidden and the overt.