Many researchers, including many Durham academics, use social media to raise the visibility of the published research, communicate about their research outside of traditional academic publication routes, or use platforms to conduct or manage their research effectively. If you are not already using social media, or are not sure if you are making the best use of the tools available to you, some of the links below may be of interest.

The Marketing and Communications Office have developed a toolkit to encourage and empower staff to participate in profile raising activities, whether they are looking to raise their own profile or that of their department or college.

The Toolkit highlights a few of the many platforms available, and identifies considerations when deciding which platform would be most appropriate. It also provides tips on getting the most from Twitter, Facebook and starting to blog about your research.

This global survey, conducted across 2015 and 2016, looked at what online tools researcher's used to support different research activities, to identify and share useful tool combinations and attitudes towards use of digital tools, social media, open access publishing and open data.

The below reports and studies looked at social media use by academic researchers, doctoral students, dotoral supervisors and other academics, and may be of interest in highlighting some of the uses made of social media, the perceived benefits received and strategies for approaching the use of social media as part of research activity or a communication strategy. 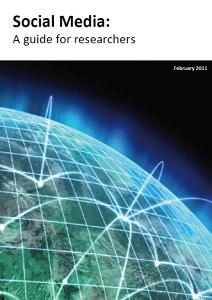 "... using social media to bridge disciplinary boundaries, to engage in knowledge exchange with industry and policy makers, and to provide a channel for the public communication of their research."

This guide, published in 2011 by the International Centre for Guidance Studies at the University of Derby, aims to support researchers in making informed decisions about using social media and other digital tools. It includes case studies from research projects in a range of disciplines, including Cell Biology, Education, Engineering and History.

The 48 page report and associated case studies, links and web materials (some of which may include links which no longer work) has been archived along with other Research Information Network (RIN) resources by JISC at: 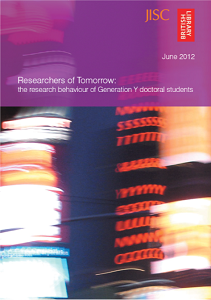 "the information seeking and research behaviour of doctoral students in 'Generation Y', born between 1982 and 1994 and not digital natives."

This study (supported by the British Library, JISC and HEFCE) found uptake of digital tools and social media amongst the surveyed respondents was increasing compared to previous studies, but still did "not use the full potential of innovative technology". Use of such tools was dependent upon how this complemented existing research practices. When looking at potential benefits of using social media, two areas which indicated the strongest agreement from respondents where that: 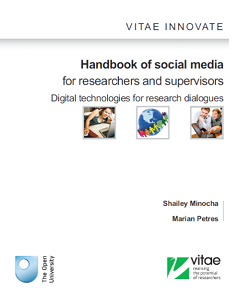 Vitae Handbook of Social Media for Researchers and Supervisors (August 2012)

"The goal of this handbook is to assist researchers ... to adopt and use social media tools in the services of their research, and in particular, in engaging in the discourse of research."

This study, conducted by researchers from the Open University, with the support of Vitae, includes examples of how researchers, and supervisors of doctoral and early career researchers, have used social media in practice.

The 140 page report can be accessed from the Vitae website at:

How Are Scientists Using Social Media in the Workplace? (October 2016)

"The most common barriers to Twitter perceived by scientists were a lack of time and a lack of knowledge ... [and] the most common perceived benefits of Twitter were the size and diversity of the audience reached by Twitter and the ability to network with other scientists."

Peer-reviewed article published in PLoS One, reporting on the results of a survey completed by 587 individuals who self-identified as 'scientists'.

To be or not to be on Twitter, and its relationship with the tweeting and citation of research papers (November 2016)

"The main conclusion is that the participation on Twitter affects the dissemination of research papers, and in consequence, it indirectly favours the likelihood that academic outputs being cited."

Peer-reviewed article published in Scientometrics, found that there was no difference between the citation impact for authors who used Twitter and those who did not, but showed that where an Author was on Twitter, their published articles saw an increased level of sharing across Twitter with the potential for reaching a wider audience beyond the usual academic circles.

The article is available to those with a subscription via the journal, or an open access version is available via the author at:

The Library has a number of resources accessible to you which may be of interest.

See our guidance on making use of Twitter as an academic and author here. 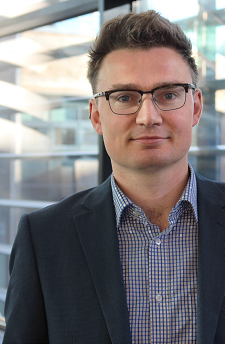 Need help? Drop me an email or request a 30 minute 1-to-1 consultation to scale any brick walls in your way.