Durham possesses the finest collection of medieval manuscripts of any English cathedral. Durham University, in partnership with Durham Cathedral, is embarking on an ambitious project to digitise the original Priory Library of Durham Cathedral. This initiative is aimed at making the best-preserved, best-catalogued Benedictine library in the UK and Ireland available globally for research, learning and teaching.

A team led by Professors Andy Beeby (Chemistry) and Richard Gameson (History) has been using Raman spectroscopy to study the inks and pigments used in medieval manuscripts. This project began in the summer of 2013 when Professor Beeby and his team began to look at manuscripts from Durham Cathedral and Durham University libraries. He was then given permission to investigate pigment on manuscripts borrowed from other libraries to display alongside the Lindisfarne Gospels. The technique has not been applied to many medieval manuscripts but had been used on a group of Anglo-Saxon books in the British Library including the Lindisfarne Gospels, and, more recently, on the Book of Kells.

The work in Durham made new discoveries, showing how writing and pigment ‘technology’ changed with the migration of the monks and scribes from Lindisfarne to Durham, and the influence of the Norman invasion. The project was funded originally by two alumni but the team applied successfully for seedcorn funding to purchase a portable spectrometer. Medieval scholars and librarians heard about the research and the Durham team has now travelled to the Fitzwilliam Museum, Cambridge; Trinity College, Oxford; the Bodleian Library and Aberdeen University to investigate manuscripts. Soon to come will be Hereford Cathedral and possibly a trip to Germany. Their work has been based on the Durham collections and they will continue to work on these against a background of travel to other libraries.

To commemorate the sacrifice and service of former members of the university during this conflict a Roll of Service will be published, in collaboration with Newcastle University, (which formed a part of Durham University until 1963). Volunteers will research the lives and careers of persons listed in a Roll of Service published by the university in 1920, enriching and supplementing that information from sources held in the University Records collection and elsewhere. Short illustrated biographies of those who fell will be published on the anniversaries of their deaths, and similar biographical pieces will be produced for those who served and survived the conflict.

This project has been funded through a bequest of Mrs Kathleen Wood, a former official of the Sudan Education Department. Mrs Wood's generous bequest has enabled the university to appoint two archivists for two years to tackle the growing backlog of uncatalogued material in the Sudan Archive. These online catalogues will open up access to hidden collections of international importance for the benefit of researchers worldwide.

This project has been funded by JISC to start the digitisation of one of our major collections, the Sudan Archive. This year-long project will digitise a range of material from the collection, concentrating on a variety of the most heavily used material. It will provide free online access to the large sheet maps and government reports that form part of the official record of the Condominium period, and investigate the tasks involved in digitising papers from personal archives.

The North East Inheritance project has created an online catalogue of over 150,000 wills and related archives (parts of the Durham Probate Records collection), from across County Durham, Tyne and Wear and Northumberland. The wills date from the 16th Century to the mid 19th Century (1858) and many are accompanied by inventories of the goods belonging to the deceased. They represent almost all the surviving wills and inventories proved within the region during the period, and provide an invaluable insight into North East people and communities, their family relationships, trades and lifestyles. The project is part funded with a £274,500 grant from the Heritage Lottery Fund.

4schools is Durham University Library's education zone. It aims to promote the study of the past by encouraging the use of primary source material. Using books and manuscript material dating back to the fifteenth century 4schools allows students and teachers to investigate key historical events and discover what life was like in the past.

For more information about projects that the whole University Library is involved in please look at the Projects page. 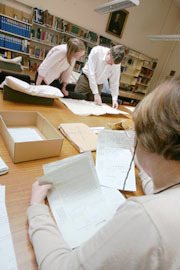