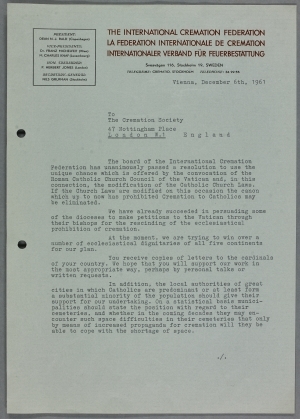 The Second Vatican Council was announced by Pope John XXIII in 1959 in order to revaluate spiritual practice in context to the modern world. It was to be the 21st ecumenical Council of the Roman Catholic Church, the previous being held in 1869-70. The meeting was, in the opinion of cremationists in many countries, an unmissable opportunity to appeal to the Church’s ban on cremation. This letter outlines the ICF’s intention to appeal to members of the Church and local authorities to petition Vatican to rescind ecclesiastical opposition to Cremation. The ICF gathered the momentum to petition the Clergy across five different continents.

The appeals were a success and, in 1964 the ban on Cremation was lifted, it was legal for a Roman Catholic to be cremated however, the Church still forbade the presence of a Catholic priest at a crematorium chapel which meant that Catholic services still required a separate mass in a Church where the liturgy could be read.

It wasn’t until 1967 that the ban on Catholic Priests attending services at crematoria was lifted.

As well as the appeals to the Catholic Church the Cremation Society also kept extensive files and leaflets on cannon law, as well as Catholic orders of service and statistics on Catholic cremation and embalming