Disposition of Dead in War Time

During WWII the Cremation Society was active in drawing up plans for the disposition of the dead in the case of national emergency and discussed the problem of disposing of the dead in Air Raids. This letter from the Cremation Society was sent to local authorities seeking support for the Society’s opposition to the government’s decision that the cremation of the civilian dead following air raids would not be permitted due to wartime difficulties in meeting the requirements of cremation certification. However, it was following the war that the numbers of cremations in Great Britain began to steadily rise 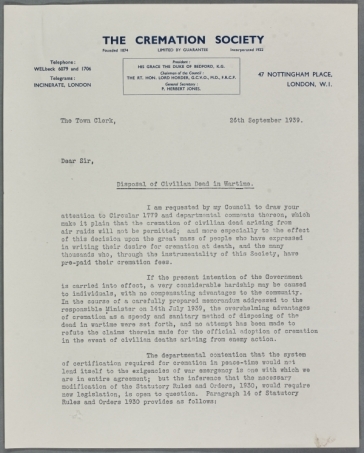