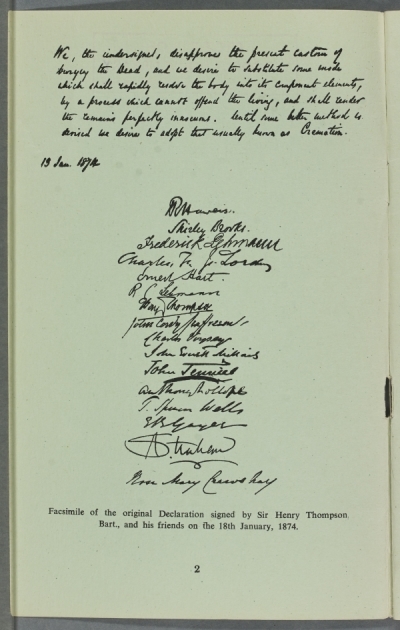 In 1874 Thompson gathered together a group of friends to create and sign the first declaration form of the Cremation Society.

The signatories included some well-known names from diverse fields. These include Shirley Brookes; Frederick Lehmann; the artist and co-founder of the Pre-Raphaelite Brotherhood, John Everette Millais; political cartoonist John Tenniel who became known for his illustrations for Alice in Wonderland; novelist Anthony Trollope; and Sir T. Spencer Wells who was surgeon to Queen Victoria and president of the Royal College of Surgeons of England.

This is a facsimile of the original declaration signed in 1874. It states:

We, the undersigned, disapprove the present custom of burying the dead, and we desire to substitute some mode which shall rapidly resolve the body into its component elements, by a process which cannot offend the living, and shall render the remains perfectly innocuous. Until some better method is devised we desire to adopt that usually known as cremation.

Membership to the society was constituted by subscription to the declaration. The main aim was to collect and disseminate information on cremation and best practice. It was never a subscription to a specific set of beliefs.