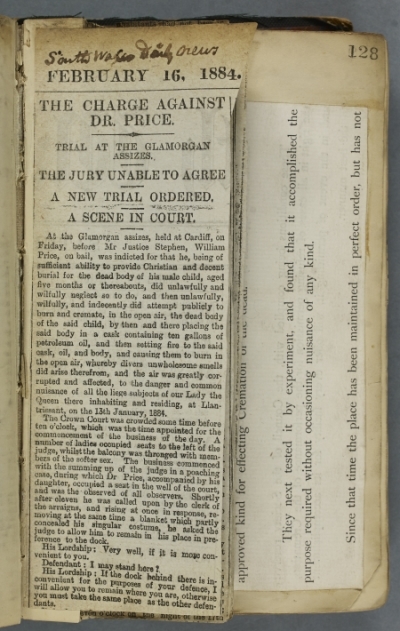 Following legal advice to the effect that cremation was not illegal the society began to look for land on which to build a crematorium. An acre was purchased and in 1878 the first crematorium in Great Britain was erected in Woking, and tested using the body of a horse.

The project faced much opposition, particularly from Woking residence and the Home Office. The Home Secretary forbade further experiments without Parliamentary approval and the legality of cremation was cast in doubt. The principle fear was that in reducing a body to ashes any sign of foul play would be destroyed. Throughout their history the society has compiled clipping books which document the change in perception towards cremation in the UK and abroad.

Due to opposition progress of the society was halted and the crematorium at Woking was not opened until 1885 following a legal case in which the Society had no involvement.

Dr. William Price, aged 83, was arrested in 1882 for attempting to cremate the body of his infant son. He was a controversial and eccentric character which seems to have drawn much attention to his plight. Perhaps less noted was a private cremation prior to this where Captain Hanham, after appealing to the Cremation Society for assistance, had his request to cremate the remains of his wife and mother rejected by the Home Office so cremated their remains himself on his private estate. Hanham faced no legal repercussions unlike Price. Though Price was not the first it was at his trial that cremation was pronounced legal by the judge, provided that no nuisance was caused to others. There are many references to Price and his role in the establishment of cremation in Britain in clippings books, pamphlets and papers.

The crematorium at Woking opened its doors and propaganda in favour of cremation began.