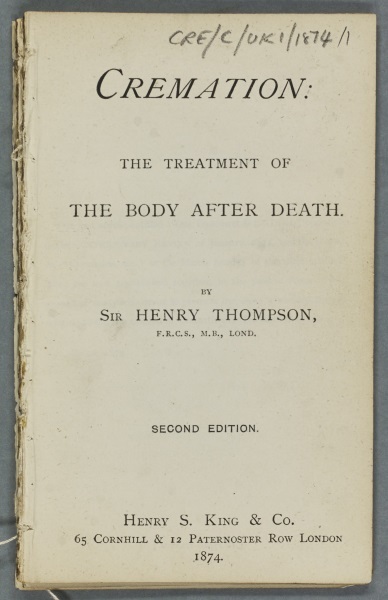 The revival of Cremation in Europe began in the late 1860s. A presentation on cremation at the 1969 Medical International Conference in Florence was followed by papers addressing the topic and, at the 1873 Vienna Exhibition Professor Brunetti presented cremating apparatus and ashes. A member of his impressed audience was Sir Henry Thompson, who, on his return to England wrote and published Cremation – the treatment of the Body after Death in The Contemporary Review, January, 1874.

Thompson emphasised the requirement for alternative means to dispose of the dead than burial and strongly believed in the sanitation of cremation:
“the grave-yard pollution of air and water alone has probably found a victim in some social circle known to more than one […] And I need hardly add that in the time of pestilence its continuance has been often due mainly to poisonous influence of the buried victims” (CremationSoc C/UK/1874/1, p.6)

Epidemics would not have been unfamiliar and cremation offered an opportunity to isolate and reduce health risks and could save space in rapidly expanding urban areas. Cremation was a modern and hygienic solution to some of the problems of the age but it did meet some opposition which Thompson and many of his contemporaries regarded as sentimental objections.

The Collection includes much of this debate in early pamphlets, lectures and clippings books.

Additional articles covering aspects of Cremation history within the UK are linked below. For a detail historical background take a look at the Cremation Society’s website.