Church, State and Nation in Britain: the Journals of Hensley Henson, 1900-1939 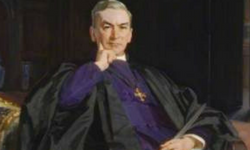 Herbert Hensley Henson (1863-1947), was a leading English churchman, a famously trenchant public moralist and one of the greatest of English diarists. He was rector of St Margaret’s Westminster (the ‘House of Commons church’) from 1900 to 1912, dean of Durham from 1912 to 1918, bishop of Hereford from 1918 to 1920, and bishop of Durham from 1920 to 1939, in which capacity he was a member of the House of Lords. When he announced his retirement as bishop of Durham in 1938, the Spectator commented that ‘the Church of England today is not rich in men who, when they speak can (like Dr. Hensley Henson) make their voice heard throughout the land’.

Henson’s unpublished journals preserved in Durham Cathedral Library are masterpieces of commentary and opinion not only on all aspects of the Church (institutional, episcopal and pastoral), but also on national and regional politics; social issues concerning the metropolitan elite at one extreme and the Durham coalfields at another; social and religious thought and literary life; and international affairs.

The project aims to pioneer research on the journals, making a large contribution to the political, intellectual, and ecclesiastical history of Britain during the early 20th century.

The project will also create a digital scholarly edition of two-thirds of the journals, the 63 volumes from 1900 to 1939 when Henson was most prominent as a public figure and as a commentator on the great events and great figures of these turbulent years.

The digital edition will enable Henson’s literary gifts and unique insight into his age to be enjoyed by a wide readership, as well as providing a valuable resource for a wide body of researchers.

The project will also pursue public engagement and impact activities at Durham Cathedral and Auckland Castle in the final year of the project.

From the Department of History, University of Leeds