The College of St Bede

The Durham Diocesan Training School was founded in 1839. Archdeacon Charles Thorp, who had played a major role in the founding of Durham University in 1832, proposed a scheme for education which included the creation of a training school. The school opened in October 1841, on its original site of 103 Framwellgate in Durham; in 1844, it moved to its current site when the land was gifted to the school by the Dean and Chapter of Durham. From 1858, a Model School was attached to the College; this was open to local children and gave aspiring teachers invaluable work experience. The School became a training college in 1865. During the following year, on the recommnedation of Bishop Lightfoot, it was renamed Bede College, and the first college chapel was founded. Although Bede remained independent from Durham University, it began to gain closer connections to it. In 1892, it was decided that Bede men who had completed two years of training were able to count their time at Bede towards reading for a degree at the university. By 1919, Bede had become a fully licensed hall of residence for the university - any students of the college automatically became members of the university also. The twelfth centenary of Bede’s death in 1935 saw the College renamed as the College of the Venerable Bede. A new chapel (still extant today) was created in 1939; it is often referred to as one of the architectural treasures of the university. The entrance into the interior of the chapel is made from the eighteenth-century doorcase of the college’s first location at Framwellgate. Bede was greatly affected by World War I, with a number of its students being drafted into the 8th Battalion of the Durham Light Infantry in the 50th Division (which became known as the Bede Contingent of the 8th.) Around 600 Bede men were involved in active service; the majority were present at the Battle of the Somme. The number of both current, and prospective, students involved in the war caused the college to close from July 1916 until 1918. World War II saw more Bede men serving in all branches of the Armed Forces; any remaining students were relocated to colleges at York, in order to make way for students being evacuated from London. After the war, the college continued to grow and expand, serving 240 students in 1960. Bede was also the first college in the country to offer Film and Television studies as part of its certificate course.

The College of St Hild

In August 1858 the Durham Diocesan Female Training School was opened - with only six students. Until the establishment of the school, there had not been a female teacher training college in north east England. Durham Diocese originally claimed that founding a female training school would be too ‘dangerous’ - especially given the proximity of the male training school. However, the site was provided in 1856 and fundraising across County Durham and Northumberland allowed building work to begin in 1857. The school became a training college in 1870, later becoming the College of St Hild in July 1896. Also in this year, the first chapel of St Hild’s was founded.

In 1895, a supplementary charter of Durham University enabled women to obtain degrees for the first time; in 1898, three Hild students became the first women to be awarded degrees from Durham.

In 1923, Hild became a licensed hall of residence for the university. The college remained open throughout both wars, although some buildings were claimed and utilised by the War Office. 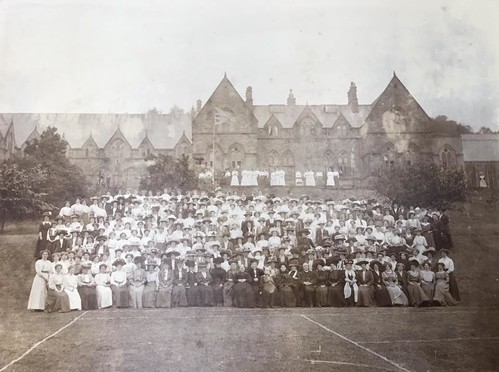 The College of St Hild and St Bede

Both Bede and Hild Colleges were frequently commended for their teaching excellence, garnering particular praise for their observational practice and innovative techniques. Although the two colleges occasionally co-operated, each had its own pedagogical methodologies. Following World War II, educational reforms saw a move towards teaching courses being four years in length, comprised of a three year degree, followed by a one year postgraduate qualification. From the 1960s, there was increasing pressure on the Colleges of Hild and Bede to merge; in 1965-6, their libraries were amalgamated, and some joint building works began to take place. Both Colleges were threatened by cutbacks in the early 1970s; again, it was suggested that they merge. In September 1975, such an amalgamation did occur, and the College of St Hild and St Bede was created. Teaching training ended at the College in 1979; on 31 July 1979, the College of St Hild and St Bede ceased to be a Church of England College of Education, becoming an undergraduate College of Durham University. Hild Bede is the largest of the Durham colleges, supporting over 1200 undergraduate and postgraduate students. It also occupies the largest site of any of the colleges, set in sixteen acres of land.

The information in this article was researched by Gemma Ashby (Hild Bede 2013 - 16).