Stephenson College celebrates the birth of its namesake 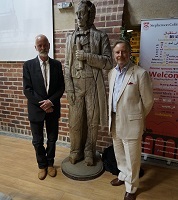 Stephenson College marked the 240th anniversary of the birth of its namesake, famed Victorian Engineer, George Stephenson, by unveiling a restored statue of the man known as the ‘Father of the Railway’.

The 7 foot high wooden statue, will take pride of place in the ‘Platform 1’ social space of the college. The statue celebrates the college’s link to the inventor of the first locomotive and builder of the historic Stockton to Darlington railway.

The Elm wood statue was created by local artist, Colin Wilbourn. It was originally one of a group of six statues, commissioned for the Gateshead Garden Festival in 1990. After the Festival, the statues moved to the University’s Botanic Garden until 2015, when they were taken down.

Titled, ‘In the shadows of the past’, the six statues commemorated famous figures from the North East, who have made their mark on the history of the region. George Stephenson’s statue stood alongside fellow industrialists, famous shipbuilder, Sir James Laing and Robert ‘Bobby’ Shaftoe, from the family of major colliery owners in County Durham. Two of Durham’s Prince Bishops, William of St Calais and John Coisin who built Palace Green Library were also featured, along with Ralph, Lord Neville of Raby, who built Raby Castle.

When Rob Lynes, Principal of Stephenson College found the artwork in storage, he recognised the statue of the college’s namesake and immediately offered it a new home. Rob arranged to have the statue restored and moved to its new permanent location within the College.

He explained; ‘Stephenson College is the obvious place for this statue. Our motto is a quote from George Stephenson who wrote, “One day I shall astonish the world”. I hope that having this reminder of him and his achievements on display will inspire our students to great achievements of their own.”

The statue was unveiled by Jeremy Cook PVC for Colleges and Student Experience, at a ceremony attended by staff, students and friends of the college, including representatives of the Hetton Colliery Railway Project. The railway line was also designed by George Stephenson and is celebrating its bicentenary this year.

Artist Colin Wilbourn was invited to the unveiling of the statue and pleased to see the restoration of his work. “It’s wonderful to see the statue is back on display, celebrating the history and legacy of the man, and this is the perfect location for ‘George.’’”

Stephenson College opened in Stockton in 2001 and relocated to Durham City in 2018. The college is planning a series of events to celebrate its anniversary later this year.