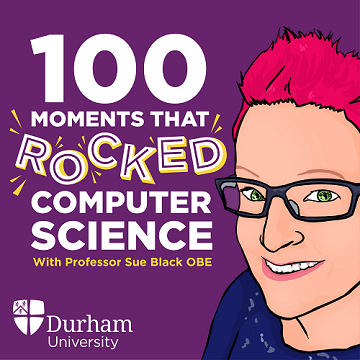 Join leaders from the worlds of science and technology and experts from our Computer Science department for a new podcast series exploring ‘100 Moments that Rocked Computer Science’ - streaming now!

Megan Smith, former Chief Technology Officer to US President Barack Obama and Sir Dermot Turing, nephew of Alan Turing, part of the British team that broke the Enigma code during the Second World War make up this incredible guest list for the first six part series.

Join them as they discuss some of the most important computer science innovations and events that have shaped the world we live in: from the birth of the internet search engine to the very first computer programmes and the dawn of the information age.

This brand new broadcast is the latest in a series of initiatives that Professor Black has developed in order to engage and interact with students and the wider community. We have also hosted virtual sessions with leading technology figures such as Dr Neil Hunt, former Chief Product Officer of Netflix and a Durham graduate.

The 100 Moments that Rocked Computer Science podcasts is now available through all major streaming services – click here to listen and subscribe.

It has held the Athena Swan award in recognition of its commitment to advancing and promoting women’s careers since 2018 – much of which is supported by a range of University and wider initiatives set up by Professor Black including the #TechUP programme and #DUWiT group.

Find out more about studying Computer Science at Durham.

Find out more about Tech Up and Durham University Tech Up Women.