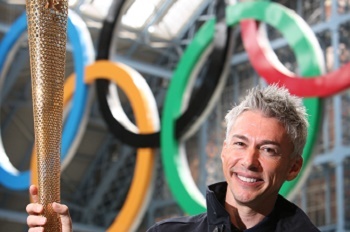 On 4 August 1995, at the World Championships in Gothenburg, Jonathan put in an historic gold medal performance, in which he broke the triple jump world-record twice in one day. He became the first man to make a legal jump over 18 metres with a jump of 18.16m, only to follow this with a jump of 18.29m. You can watch the magnificent moments on video here.

Jonathan’s records made history on that day in 1995 and still stand today, with nobody having jumped that far before or since. A BBC documentary is set to air this Saturday, commemorating Jonathan’s record-breaking day and his remarkable career.

Jonathan was at Van Mildert College and graduated in 1987 with a degree in Physics. He did most of his training in Gateshead but competed for Durham in the University Athletic Championships, finishing 2nd in 1985 and 1st in both 1986 and 1987.

In 2009, we awarded Jonathan with an honorary degree from Durham in recognition of his outstanding athletic career.

We find it easy to be proud of the extraordinary people we have at Durham. Jonathan is a prime example of these outstanding people and we are proud to celebrate with him today.