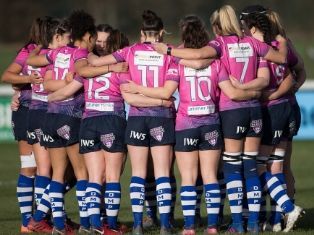 Although all University sport is currently suspended due to Covid-19, we’re looking forward to when we can all get back in action – and we’re excited to announce a great new opportunity for our women’s rugby players, hopefully starting this summer.

Thanks to a partnership with North East England’s leading women’s rugby club, our student athletes will have extra opportunities to pursue a world-class education while also competing at a national level.

Since 2017, Darlington Mowden Park (DMP) have competed in the Premier 15s – the top level of women’s rugby in the UK.

A number of our student athletes have played for DMP and some of our performance support services have also been closely involved in the programme.

The new partnership will mean that our female student rugby players can pursue their academic studies with us and have the chance to compete at the top levels of their sport.

For the Club, it means: extra investment; access to our Sports and Wellbeing Park; and support from our sport, medical, performance and strength and conditioning experts.

On Monday 6 April, rugby’s governing body confirmed that DMP Durham Sharks will be one of ten clubs competing in the Premier 15s for the next three seasons.

The current season has been abandoned due to Covid-19 but, restrictions permitting, we hope the new season will be able to begin as scheduled in late September.

We have a long and proud history of excellence in women’s sport in general and women’s rugby in particular.

We have the largest rugby programme of any UK university and last year reached the final of the British University and Colleges (BUCS) National Championships.