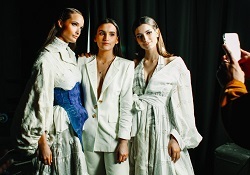 Durham University Charity Fashion Show (DUCFS), a student-organised society, is delighted to announce that they have raised a record-breaking total of £171,000 in aid of their chosen charitable partners, Fashion Revolution and STOP THE TRAFFIK.

The show took place at Rainton Meadows Arena over two nights and saw almost 3,000 people attend. The spectacle brought together the work of various sustainable and ethical graduate designers, including the talented Celine Zara and Naemi Gustavsson.

The money raised will go towards a collaborative charity campaign which aims to shed light on worker exploitation throughout global supply chains in widespread industries. This year, DUCFS has adopted the theme #shapeshift, striving to incite a desire amongst consumers for supply chain transparency.

In the past few months, student members of DUCFS have organised numerous events to raise additional funds and to encourage local culture-shift and engagement with these crucial conversations, such as a clothes swap and a speaker series with representatives from Fashion Revolution, STOP THE TRAFFIK, The Helen Bamber Foundation, Eden Dodati and Linden Staub.

DUCFS will continue to work closely with Fashion Revolution and STOP THE TRAFFIK to launch their own bespoke charity campaign over the coming weeks.

DUCFS has several exciting developments in the pipeline, including a fanzine collaboration with Fashion Revolution and Stop the Traffik, which will be launched as a part of their charity campaign later in 2020. They are also working on a podcast series, and a print edition of online publication, THREAD, all of which aim to raise greater awareness around labour exploitation and prompt more mindful consumption habits.

After 37 years of uniting fashion and creativity in Durham, DUCFS is thrilled to continue growing year on year; however, the fashion industry remains stuck in the past. This sentiment is perfectly encapsulated by co-founder of Fashion Revolution, Orsola de Castro: “we need to bring this conversation up to speed with where we are at now and to make it relevant for your generation, as it was relevant for mine”.

As we move forward, we endeavour to make these conversations about workers’ rights and unionisation relevant to our generation, and ultimately to push for a revolutionised attitude towards fashion, as “the clothes that we wear can be as valuable and powerful as absolutely anything we say”.