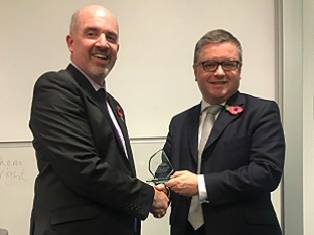 Alumnus Robert Buckland QC MP has been appointed as Lord Chancellor and Secretary of State for Justice. He was previously Minister of State for Prisons at the Ministry of Justice and is a serving MP for South Swindon.

In 2018, when he was Solicitor General, Robert received the inaugural Dean’s Award for Achievement from Durham Law School (pictured above with Dean of the Law School, Professor Thom Brooks). During his visit to Durham to receive the award, he gave the inaugural Law School Annual Lecture where he talked about his work with staff and students.

Robert studied Law while at Hatfield College between 1987 and 1991, and was the first Durham graduate to become a Law Officer of England and Wales. Reminiscing about his time at Durham he said:

“My time at Hatfield College was happy and memorable, with friendships made both within College and across the University that endure today. My extra-curricular activities took precedence over my degree studies I have to confess, but I would do it all again in the same way.

“I learnt to debate properly at the Durham Union, enjoying my Presidential term and competing on behalf of Durham in national and international competitions. My loyalty to Hatfield is deep and strong, and I was particularly proud to serve as a JCR Officer there.”

Our alumni know that Durham’s collegiate community is just one of the things that makes Durham a university like no other. The supportive world of college life is where they discover a rich extra-curricular culture. This community lives on in the friendships and connections that began here and continue to endure, making them part of a lifelong global community of extraordinary Durham people.