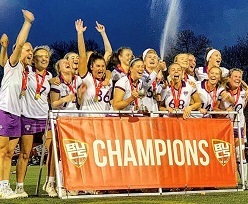 Team Durham had a fantastic day at the British University College Sport (BUCS) Finals, winning a grand total of 5 medals out of 10 finals played on the day, finishing 3rd in the medals table.

BUCS Big Wednesday is the pinnacle of the team sport league programme and throughout the day 60 of the UK's top university teams travelled to Nottingham to compete for Championship and Trophy titles.

Lacrosse saw the Women’s 2s take the win in the Trophy final. They got off to a flying start with an early goal, however Birmingham fought back and the game couldn’t have been closer as the scores were all tied up at half time 5-5. It was 8-8 with minutes to spare and with 3 late goals Durham finished victorious, 11-9 final score and the first gold in the bag. Lacrosse had a fantastic day all round as both the Men’s and Women’s 1s secured their gold medals against strong opposition. In the Women’s game, with a tight start, Durham were up by 1 goal at half time, 5-4.

The girls soon found their momentum as they quickly went up by 2 to make it 7-4. Cambridge clawed their way back and with 8 minutes to go the girls found themselves at 7-6 but late goals from Tilly Shires and Zoe Gomez secured Durham’s fate at 9-6. It was then the Men’s turn to take the stage against Nottingham Trent, again a close start, however they soon found their stride as Durham took a 2 goal lead with seconds left before half time- 5-3. They came out of the talk on form and with 7 minutes left of the game were 12-3 up, after a frustrating second half for Trent who couldn’t seem to find the answers to Durham’s relentless attacking play, they netted 3 times, but it wasn’t enough to challenge the gold. Final score 12-6 Durham.

After a successful weekend in the Women’s doubles taking silver in the lead up to the final, Durham faced Stirling yesterday in what would be their toughest battle yet. Unfortunately, with our number 1 seed injured and despite Durham’s best effort, it just wasn’t enough to take the gold from a strong Stirling side. Final score ended 2-8.

Again, hockey was a nail biter, with some good possession early on, Durham narrowly missed their first short corner of the game. After some end to end play, Exeter managed to penetrate Durham’s circle edge and win a short for themselves and scoring the corner meant Durham walked into the changing room 1-0 down at half time. Durham started the 2nd creating some great opportunities and had soon levelled the scores 1-1. When a corner awarded to Durham on the final whistle and put away by Max van Shaark was disallowed, Durham found themselves stepping up to their biggest challenge of the season. With a performance the boys can all hold their heads up and be proud of, unfortunately it wasn’t to be and the final score ended 4-2 Exeter on flicks.

Fencing was a close one too, the men trailed after Epee by just one point after a tense priority minute. They lost again in the Sabre by 3 which seemed to be Edinburgh’s strongest weapon which left them 4 points down going into the Foil. In a thrilling set of bouts the men secured victory with a 45-39 score which took them to overall triumph taking the gold by just 2 points. This is Fencing’s 3rd BUCS gold in as many years.

Volleyball was a two sided story. The women, who faced Northumbria in the final secured their gold medal with a 3-1 victory overall. Durham took the first set with a 25-17 win, however Northumbria took the second 25-18. With the sets tied at 1-1 Durham stepped up the intensity going into the third and were rewarded with a 25-21 scoreline . Northumbria had no response as Durham went on to take the 4th set and overall championship title 3-1.

Men’s volleyball sadly didn’t have such a happy ending as they set up against a strong Essex side. A tough first set for the boys saw them down 1-0, however they came out fighting in the second. A close set saw Durham narrowly miss out 23-25 and going into the third 2-0 down. With the greatest of efforts and a brave performance, Essex proved too strong and the score ended 3-0 Essex.

Basketball was an exciting final as Durham stormed the first quarter with a convincing lead 21-12. Northumbria came back fighting in the second, narrowing the gap to 41-37 heading into the changing rooms for the half time talk. An exciting third quarter kept the crowd on the edge of their seats as Northumbria edged a 66-62 lead. Durham had not given up and the two teams battled it out, with 1 minute to go the score sat at 79-79. Durham put everything in to the game but to their disappointment the game finished 80-86. They took home silver, still a fantastic achievement.

A strong St Andrews side lined up to face Durham in the Waterpolo. Despite a big Durham effort, the 1st quarter saw us down 1-3. St Andrews kept applying the pressure and the half time score finished 2-5. The girls kept up their fighting spirit but started to tire in the second half, despite their best efforts, there was nothing that could be done as they took home the silver in a game that finished 7-12.

Team Durham would like to thank all who made the trip to support the teams and a massive well done to all athletes and coaching staff who were involved.