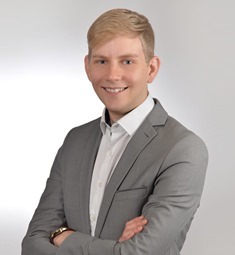 Dr Marek Kubik has been included in the prestigious 'Forbes 30 Under 30 Europe: Industry' list for 2017. The 29-year-old currently leads the UK client solutions team for AES Energy Storage, a subsidiary of the AES Corporation and leader in commercial energy storage solutions. Marek graduated from Durham University in 2009 with an MEng in Civil Engineering.

The ‘Forbes 30 Under 30’ lists recognise the 30 most important young entrepreneurs, creative leaders and brightest stars in their respective industries. The full European list contains 300 places across 10 industries with more than 15,000 entries from around the world.

Marek's work focused on the use of energy storage to address the intermittent nature of renewable power. He had an instrumental role in the development of the UK’s largest and first fully commercial storage facility at Kilroot Power Station, in Northern Ireland. The 10-megawatt storage array, which uses more than 53,000 batteries, was opened in January 2016.

During his time at Durham, Marek was Branch President of Engineers Without Borders and received numerous awards including the Arup Design Prize for Civil Engineering Design.

Professor Charles Augarde was Marek’s final year project supervisor and recently spoke with him about his time at Durham University and career since graduating.

What has been your career path until now and what do you do in your current role?

After my MEng at Durham I went on to study an Engineering Doctorate, which is a sort of industry based PhD. I completed this with The University of Reading and AES, a global Fortune 200 energy company that provides affordable, sustainable energy to 17 countries. During this I worked in AES’s London office on identifying the system challenges of integrating increasingly variable and intermittent forms of renewable energy. My research identified several areas where flexibility was critical for ensuring a transition to a sustainable energy system, and one of those areas was storage.

AES happened to be global pioneers in commercial grid scale battery energy storage, having deployed the world’s first grid scale lithium battery-based storage almost 10 years ago. Back in 2015 in Europe there were mostly small kilowatt scale technology pilots. Whilst I did initially consider a more policy focused career path – and worked for a time in Westminster – I realised that I could more effectively drive innovation in industry.

I was fortunate to find a role with AES after I completed my doctorate that led to my involvement in the development of the first fully commercial grid scale storage project in the UK. This 10MW array was deployed within an existing power station and has helped to catalyse the market for hundreds more megawatts of fast responding batteries. Tens of Gigawatts of storage are anticipated to be required in the UK over the next decade so this the first step towards significant, rapid and disruptive growth!

About a year ago I was approached for another role within AES, moving overseas from business development to a start-up client solutions team in Amsterdam. In other words, rather than AES owning and operating each asset, making our technology available for sale to 3rd parties. This opens our solution up to scale and solving a lot more problems for a lot more people. For instance, AES Energy Storage were just recently the solution provider behind the world’s largest lithium ion battery-based energy storage array, unveiled last month in Southern California by Utility SDGE.

I currently lead our client solutions team for the UK market, which basically means I am the main point of contact for our clients, listen to their needs and ensure we deliver a solution that will not only meet but exceed their expectations.

Building my skills at Durham

One of the most attractive things about the course at Durham was the two years of general engineering before specialising, which is not something many universities offer. This has been foundational to some of my career success – I started out studying Civil Engineering and my current role in energy storage is more a blend of electrical and mechanical, so knowing the fundamentals of each has been crucial.

My course at Durham also focused a lot on some of the softer skills – teamwork, entrepreneurship, management and communication. Each one of these is vital almost no matter what you end up doing, but certainly they all apply very much to the career path I’ve taken.

I probably didn’t think it at the time (there were a few times I cursed it!) but the sheer number of hours planned as part of the course were very important, character building stuff and I learned a lot. You had to be extremely good at time management to get through 20+ hours of weekly lectures, workshops and lab hours AND do all your assigned essays, reports AND still find time to get involved in sports, societies and nights out! I got to know a great bunch of people doing it, and we pulled each other through. If you think of the amount of content you receive subdivided by your tuition it’s got to be one of the best value degrees around.

In terms of thinking about courses to apply for I think engineering is a great choice, especially if you are not sure what you want to do next. It’s not just the content you take away, it’s also your approach to solving problems, thinking creatively and working with others and there are not many career paths that won’t be open to you. I thought I had a very clear path after my degree and life took me in a completely different direction, yet I still found the skills I learned at Durham very useful.

At university, it’s almost inevitable that you’ll go through periods of stress and pressure – you’re not alone! The best way I found of handling it was to turn up prepared and try to run ahead of the work curve. Whilst everyone works differently I found I was most effective turning things in a few days early rather than obsessing over them to the deadline as it freed me up to focus on the next task, and meant there was some slack if I needed to take some downtime.

In terms of career I would say it’s important to have the courage to follow your heart and intuition. It’s ok to risks; you need to if you want to grow and develop. Don’t worry about failures, wear them as a badge of honour - no one succeeds at everything all the time, and we often learn more from making mistakes than getting things right.

Without a doubt one of the best things about Durham was the collegiate structure, it creates a very social atmosphere as well as some healthy competition and rivalry. Each college having its own bar and personality was fantastic for variety of setting on top of the charm and character of Durham itself as a city.

If you’re looking for a society to get involved in I highly recommend ‘Engineers Without Borders’, who do a lot of interesting and rewarding work in sustainable development that makes for great experience and CV material. Also, look out for scholarships, awards and other funding that’s out there. All help with the burdens of being a strapped for cash student, and provide motivation for stretching yourself.

Find out about the Engineering degrees at Durham University at www.durham.ac.uk/ecs/undergraduate/degrees/eng