Ustinov College marks the centenary of its namesake 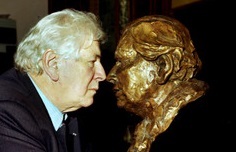 On 16 April 2021, Ustinov College is marking what would have been the 100th birthday of the late Sir Peter Ustinov, former Durham University Chancellor and namesake of Ustinov College.

A programme of activities is taking place, organised by both the College and the Graduate Common Room made up of current postgraduate students, to commemorate Sir Peter and his contribution to the University. An Oscar-winning actor, writer and director, stage designer and storyteller, Sir Peter was Chancellor of Durham University from 1992 – until his death in 2004.

In 2003 the University renamed its Graduate Society, the college for postgraduate students, Ustinov College in his honour. Sir Peter said he felt a particular affinity with this college, whose members are drawn from the widest international background.

Planned events include the launch of video messages from Vice-Chancellor, Prof Stuart Corbridge and Sir Peter's son, Igor Ustinov, Chairman of the Ustinov Foundation, to mark this special date. The college has an on-going relationship with the Ustinov Foundation, set up by Sir Peter and his family, which continues to develop links between academics, writers, politicians, other public figures and the media throughout the world.

Ustinov College Principal, Professor Glenn McGregor has also recorded a tribute to the college’s famous namesake who was honoured for his humanitarianism and as a champion of international understanding and peace.