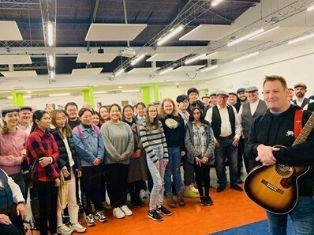 International students have recorded a charity single to raise awareness of mental health.

Among the students involved were nationals of Bahrain, China, Ghana, South Korea, Portugal and Zimbabwe.

What did the students say?

Chester Tsz Lam, 17, from Hong Kong, who is studying Humanities, Law and Social Science International Foundation Year, said: “I felt that I wanted to be part of something bigger, and do something meaningful.”

William Selorm Awumee, from Ghana, who is studying BSc Computer Science, said: “It was an amazing experience. Singing together as one for a common purpose and goal was wonderful. When you’re far away from home, engaging in this activity felt like home. It didn’t just feel like a choir but a family.”

Who else was involved?

The students teamed up with Infant Hercules, a male voice choir, and Mike McGrother, a recording artist. Over 1,000 members of the local community were also involved.

The song was recorded by Dave McCormack, who has recorded artists including Robbie Williams.

The song ‘One More Light’ can be purchased through iTunes.