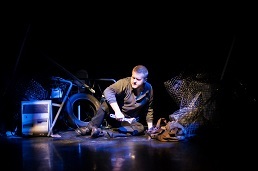 Fourth Wall’s production of Gary Owen's 'Killology' was selected to perform at the National Student Drama Festival 2019, held in Leicester. Over 30 Durham students attended the festival, many were invited as Festival Company members by professional selectors watching Durham shows.

'A controversial new gaming experience is inspiring a generation. In Killology, players are rewarded for torturing victims, scoring points for ‘creativity’. According to its creator, Killology isn’t sick. Because yes, you can live out your darkest fantasies, but you don’t escape their consequences. Out on the streets, not everybody agrees with him.' Exploring toxic masculinity, violence and video games, the play is shocking, unapologetic and impactful.

The show received a standing ovation for both performances. 'Killology' also won the Best Technical Design Award for technical director Tristan Ashely and the CP Acting Award for Most Promising Actor for John Broadhead. This is the fourth year in a row Durham’s acting talent has been recognised and rewarded at the festival. Durham student Melissa Chan also won an award for her contributions to the festival's Technical Team.

Durham's success at the festival

The National Student Drama Festival was founded in 1956 to encourage and celebrate the best and brightest student theatre that the UK had to offer. The festival is a platform where young people can come together and celebrate the power of performance. Alongside performance opportunities, the festival is also packed with workshops run by industry professionals and covers everything from acting, to producing, to pyrotechnics. Durham has had productions selected to perform at the festival consistently for the past 5 years, and won awards for the last 3 years.