More than a million barriers on Europe’s rivers

Fresh water ecosystems can be adversely affected by barriers to the flow of water and a new study suggests that Europe’s river system is particularly badly affected.

Researchers identified at least 1.2 million instream barriers, including thousands of large dams but also a myriad of smaller structures such as weirs, culverts, fords, sluices and ramps, many of which may no longer be needed and could be removed.

The international research group, which included Durham University, concluded that European rivers are probably some of the most fragmented in the world.

Using a combination of modelling and fieldwork, the researchers estimated that there are least 0.74 barriers per km of water channel, and produced a ‘barrier atlas’, the first comprehensive pan-European barrier inventory.

Barriers can inhibit fish migration and affect the diversity of life in rivers and streams by restricting the flow of water. The researchers are part of a group known as AMBER, which is calling for better management of barriers or the removal of those no longer needed.

Dr Martyn Lucas, a Durham University bioscientist, who took part in the study, gave an example of what can be achieved. “Removal of a weir on a coastal north-east England stream by the Tees Rivers Trust allowed rapid recolonisation by critically endangered European eel. Their abundance increased 60-fold in just 17 months after barrier removal – it was phenomenal.”

The research project was funded by the European Union’s Horizon 2020 research and innovation programme and co-ordinated by Swansea University, Wales.

Discover more about AMBER and the AMBER Barrier Atlas.

Find out about the Department of Biosciences at Durham University 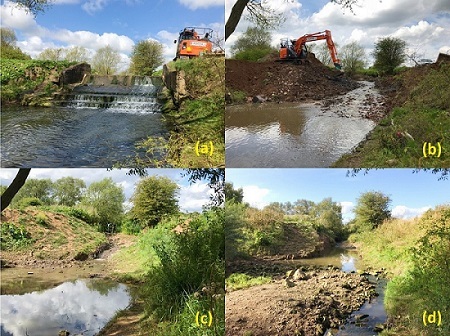 Weir on a Northeast English stream removed by Tees Rivers Trust - a) before, b) during, c) after, d) 17 months after, removal.