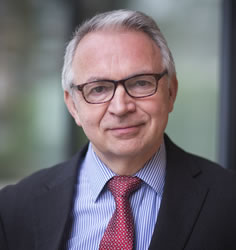 The Vice-Chancellor leads the University’s senior management team. He is responsible to Council for the overall strategic direction and performance of the University. As Warden, he has overall responsibility for Durham's colleges. He is also responsible for the University's Development and Alumni Relations Office.

Stuart joined Durham University in September 2015, having previously served as Deputy Director and Provost at the London School of Economics and Political Science (LSE).

Also while at LSE, he served as Head of the Department of International Development from 2007 to 2010 and Pro-Director for Research and External Relations from 2010 to 2013. Prior to LSE, Stuart taught for 11 years at Cambridge University and worked twice in the USA.

Stuart holds an undergraduate degree and a PhD in Geography from Cambridge University.