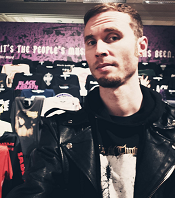 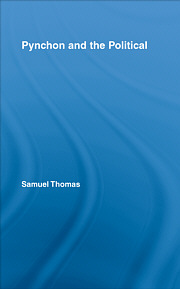 My research is primarily focused on contemporary US fiction and can be divided into the following broad areas: (i) Theories and representations of resistance, counterculture, crime, and political violence; (ii) relationships between literature and popular/underground music; (iii) the interplay between ‘literary’ and ‘genre’ writing (and the cultural politics of genre more generally); (iv) transnational and regional approaches to US fiction.

The most significant through-line here is my work on the novelist Thomas Pynchon. Pynchon and the Political, my first book, was published by Routledge in late 2007. This project is part of the 'Studies in Major Literary Authors' series and explores the relationship between political commitment and postmodern play in Pynchon’s extraordinary and demanding fiction.

My more recent research investigates Pynchon’s engagement with national/regional cultures beyond the borders of the USA. This phase of my career includes long articles on the representation of the Balkans in Against the Day and on Argentine literature and politics in Gravity’s Rainbow. My interest in Pynchon continues unabated with a new publication on (un)popular music in Bleeding Edge.

In August 2013, I organised 'International Pynchon Week' in Durham, a 4-day conference that featured close to 50 speakers from around the world. I have also spoken about Pynchon on CBC's 'Sunday Edition'. You can listen here:

Beyond Pynchon, I have published scholarship on the depiction of terrorism in contemporary fiction and cinema (including the work of filmmakers such as Hany Abu-Assad and Olivier Assayas).

I am currently developing a book on metal music and modern American literature, alongside a variety of shorter pieces and engagement activities focused on metal culture. I recently introduced a special screening of Jonas Åkerlund’s Lords of Chaos at the Tyneside Cinema in Newcastle, for example, and curated a ‘literary metal’ playlist for the Department’s research blog:

I am a member of the Centre for Modern Conflicts and Cultures in Durham, the Captivating Criminality Network, and the International Society for Metal Music Studies.

My lecturing is mostly concentrated on the Level 3 American Fiction option. In academic year 19/20, I launched a Level 2 seminar module called ‘Contemporary US Fiction & the Question of Genre’ (having previously run the special topic ‘Fictions of Terrorism’ for many years). I have also introduced an MA class on US Crime Narrative (replacing a long-standing module devoted to Pynchon). For the past few years, I have convened and helped to restructure the Department's Level 3 Dissertation module.

In 2017, I won the DSU’s annual award for ‘Outstanding Academic in the Arts and Humanities’, for which I am very grateful.

I have experience of supervising a number of PhDs. My previous doctoral students have completed successful projects on topics such as: Pynchon and theology; sprituality and landscape in Pynchon’s Californian trilogy; the Faust myth in Pynchon and Gaddis; the US Presidency in Pynchon, Roth, and McCarthy.

From 2010 to 2017, I was the international co-ordinator for English Studies. During this time, I was responsible for managing our Erasmus and Overseas Exchange partnerships and I implemented the Department's first degree programme to include a full year abroad.