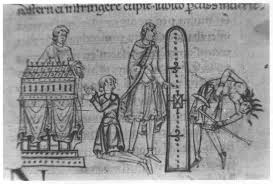 Cuthbert: A not so benevolent saint

From the time that St Cuthbert’s relics were translated into the newly built cathedral in 1104, the monastic community sought to construct a narrative which established the holy Cuthbert as vengeful protector of the community’s interests. Examples of saints wreaking miracles of vengeance on those who insulted their authority, doubted their power, or threatened the interests of the community to which they were attached, are fairly commonplace in medieval texts. Symeon of Durham’s history of the church of Durham, however, is interesting for the number and harshness of miracles wrought against women who dared to approach Cuthbert’s tomb in the early twelfth century, women to all intents posed no overt threat to the interests of Cuthbert or his community, who admired, loved and wished to honour the saint. The reasoning Symeon gives for women being barred from Cuthbert’s tomb is that centuries earlier, when the monks and nuns of Cuthbert’s community lived together in a double community, the nuns led the monks astray into immoral behaviour, and ever since, no woman had been permitted to approach the saint’s relics.

In this lecture Abigail Steed seeks to explore the deeper significance of these vengeance miracles described by Symeon, which to a modern reader seem entirely gratuitous, by setting them in the context of the moral ideology and purpose of the author, and the need to establish the legitimacy of the new cathedral community, in which the old Anglo-Saxon members had largely been replaced by Norman newcomers. Abigail will also show how the character of a saint and particular aspects of a cult could be exploited to promote certain discourses in different times and contexts.