This fluorescence imaging technique illuminates the sample with a sheet of light directed in from the side, with the camera viewing the sample perpendicular to the sheet, as illustrated below. The main advantage of this is that only the cells in the plane of imaging will fluoresce. This makes it easy to build up 3D reconstructions of living tissue, while minimizing the amount of harmful light to which the sample is exposed. An open access review article by the group on SPIM can be found in the Journal of Optics "The Light-sheet Microscopy Revolution" (Ref 1) or a more general look at SPIM can be found in the Royal Microscopical Society "In Focus" journal "Light-sheet Microscopy Comes of Age" (Ref 2). 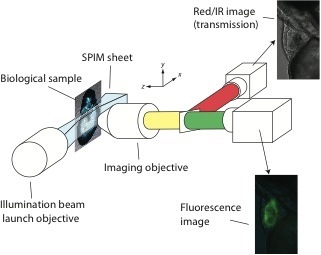 The method, however, is only suitable for certain types of sample the most important of which are Zebra fish. Zebra fish have now become an important tool in the biologists as they are transparent, comparatively easy to genetically manipulate and have proved to be, surprisingly, a very good model for human studies particularly studies of early embryonic development and investigations of fundamental gene funciton. Further details can be found in a podcast given by Prof Girkin (Beating Hearts).

The technique was originally developed by Ernst Stelzer in Heidelberg though has historical roots back to Richard Zsigmondy a Hungarian Nobel prize winning colloidal chemist who developed the so called "ultra-microscope" which was cited in his Nobel prize. We have extended the technique for 3D imaging of the living, beating zebrafish heart. To do this we exploited the real-time software and hardware expertise within the group to develop a method of ensuring that every camera image is taken when the heart is at the same point in its cycle. This makes it possible to build up a consistent 3D model of the heart within about 20 seconds, a significant improvement on existing techniques that would require more like 20 minutes to build up a good image (Ref 3, 4).

The 3D reconstruction showing the beginnings of trabeculation within the heart of a 5-day old zebrafish, acquired while the heart was beating normally, is shown below while the video can be found in Reference 3. 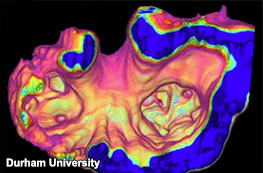 This synchronization technique has other potential applications beyond SPIM microscopy, and we have advanced the method to include precision targeting of laser intervention aimed at individual cells within moving cardiac tissue (Ref 5). We have taken the ablation work further through the use of transgenic zebrafish which express the “KillerRed” protein linked to renin production. When illuminated by yellow light the KillerRed produces reactive oxygen which locally kills (or ablates) the cell targeted (Ref 6). This is the first time that in vivo cell ablation has been achieved with 100% survival of the sample. Using this method we are in the process of demonstrating that individual kidney cells can be ablated which is already showing that these cells play an unexpected role in the development of the heart.

Killer-red ablation system on the left and on the right two images showing the vasculature in green (GFP) and the Killer-red (in red) 10s and 3600 seconds into the ablation process.

We have also linked the SPIM system with the ophthalmic research and are currently using the SPIM to watch the development of the zebrafish eye over 48 hours to determine where and how individual cells move as part of our work on the development of the lens in all animals (Ref 7,8,9). This work is linked with Prof Roy Quinlan (recently retired) from Biological Sciences in Durham and Prof Jun Jie Wu from the Engineering Department in Durham. 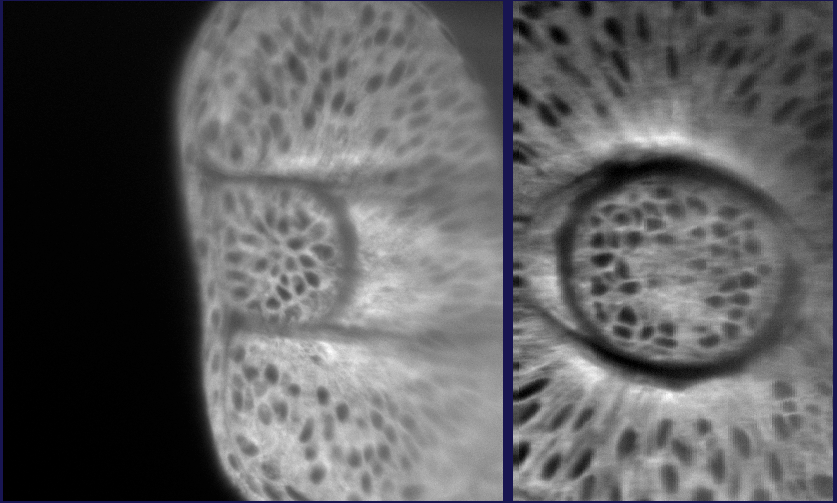 In order to improve the ability of SPIM to image more deeply we have pioneered the use of adaptive optics to correct for image distortion caused by the local optical properties of the samples (Ref 10). This has been undertaken both using adaptive optics which determine their shape based upon image optimization and also sensing of wavefront errors (Ref 11). We have also developed methods to optimize the excitation beam within a SPIM system and methods to quantify the beam quality(Ref 12).

We have also now added an extra beam into the system through the imaging arm to activate a fluorescent compound, Killer Red, which can be genetically encoded into living samples. When light activated it kills only those cells that are expressing (producing) the Killer Red protein and the recovery from this loss of specific cells can then be studied (Ref 13). This is important in Zebra fish as they have abilty to repair mainy organs which humans are unable to do including the heart and this may offer a new route to heart repair in humans.

Our work is presently centred on imaging Zebra fish embryos (under 5 days) to help understand both development and the repair processes within animals. The biological collaborators include Prof John Mullins in Edinburgh, and Dr Calum MaCrae in Harvard through the British Heart Foundation and optically with Dr Jonny Taylor a former post doctoral researcher in the group now a lecturer at Glasgow.