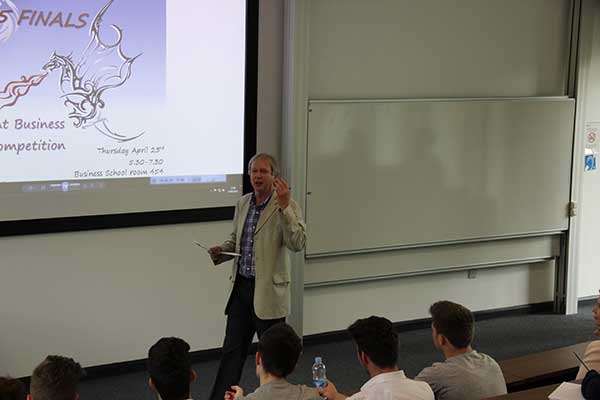 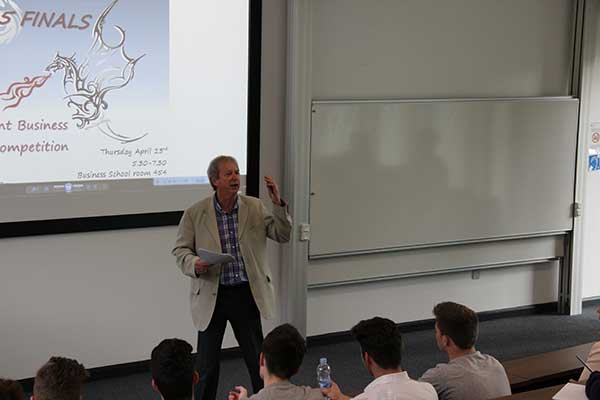 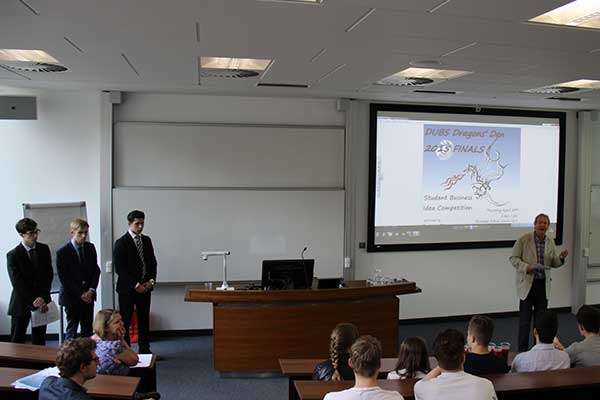 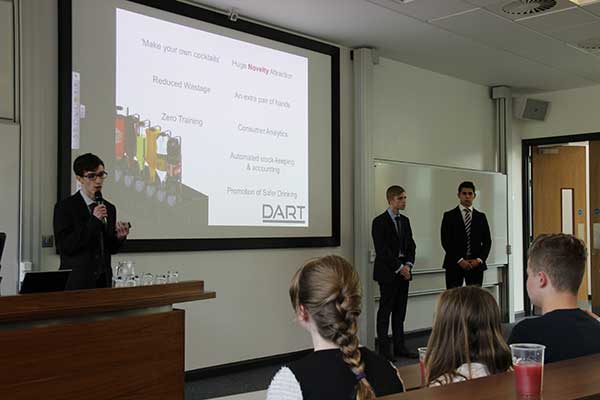 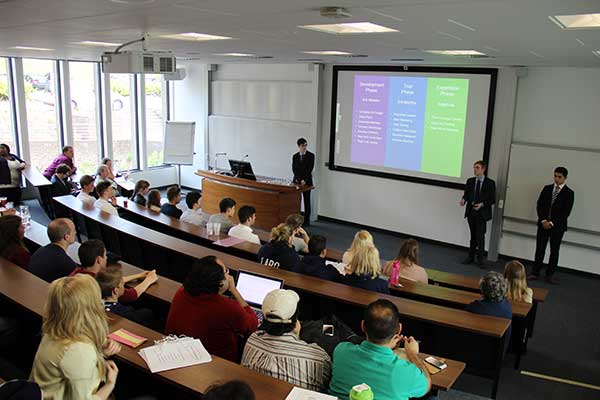 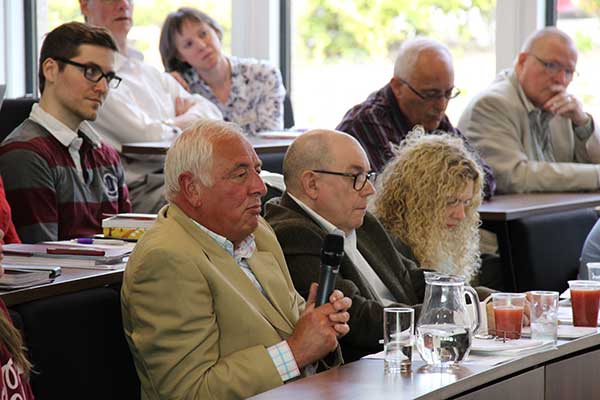 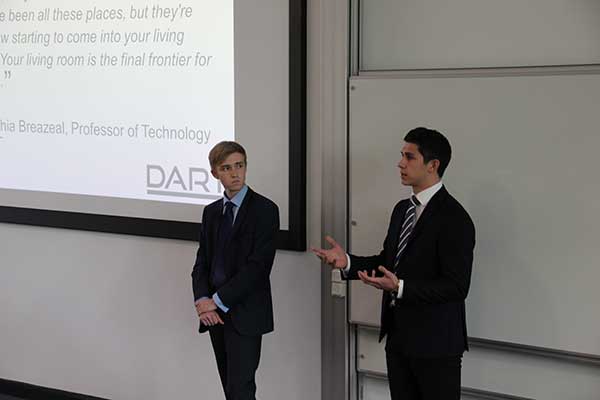 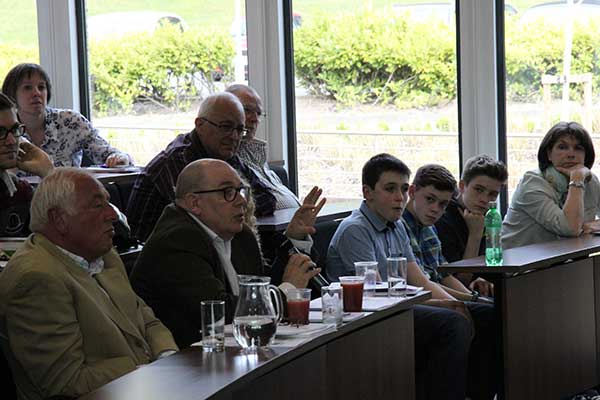 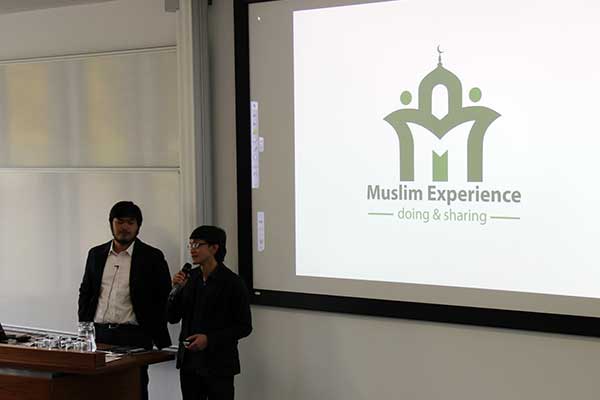 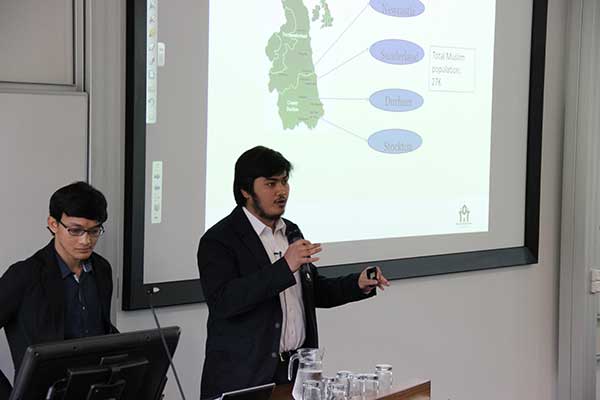 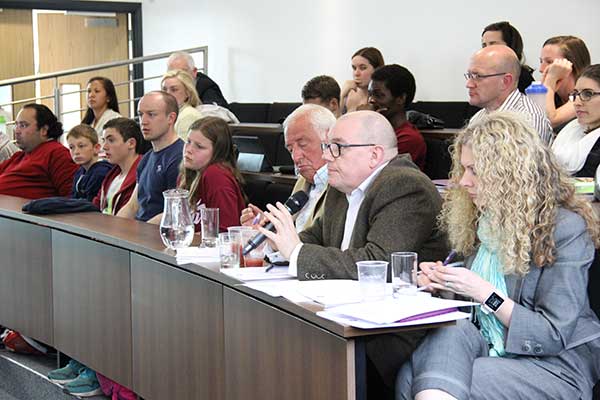 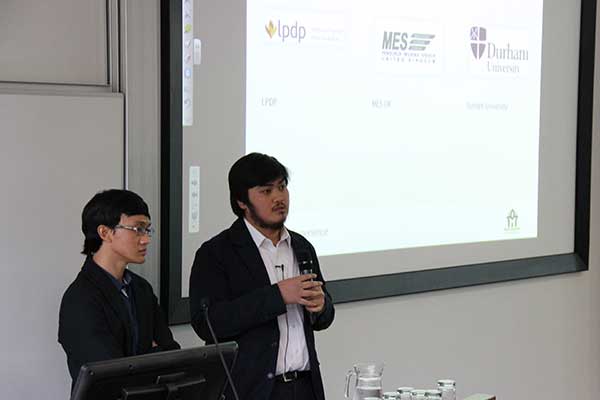 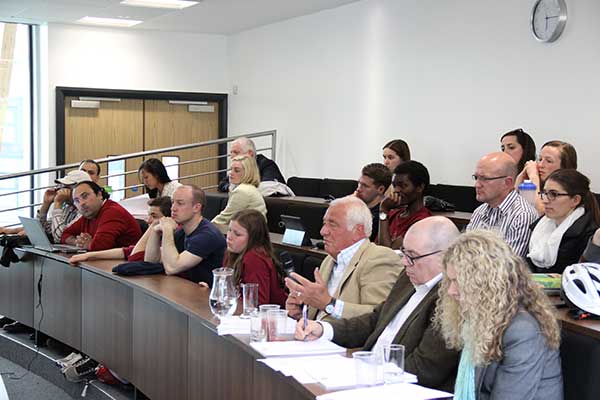 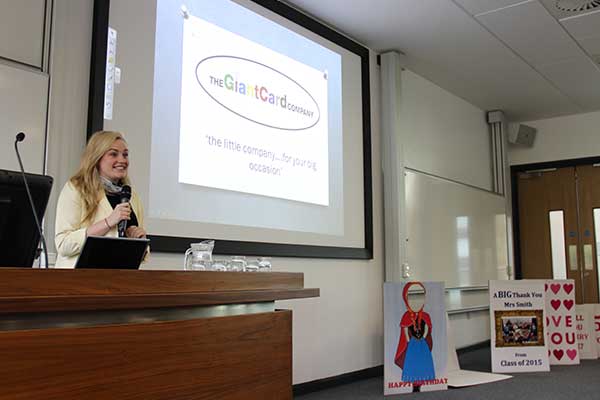 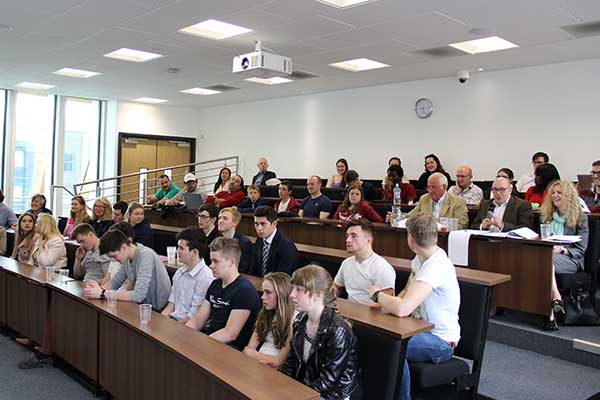 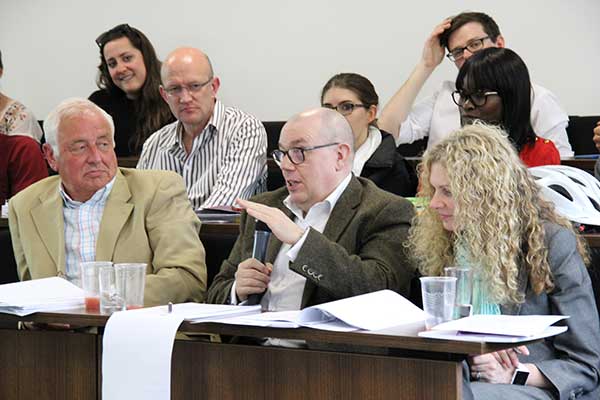 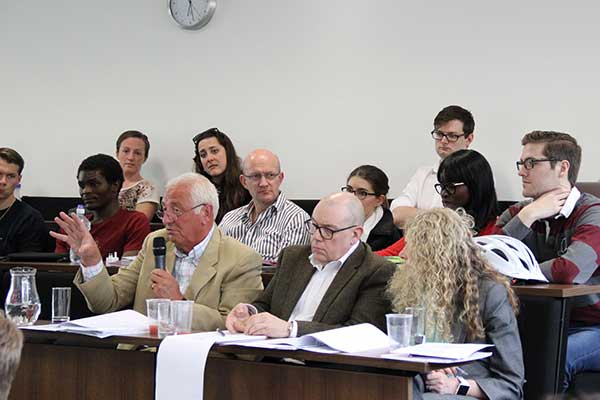 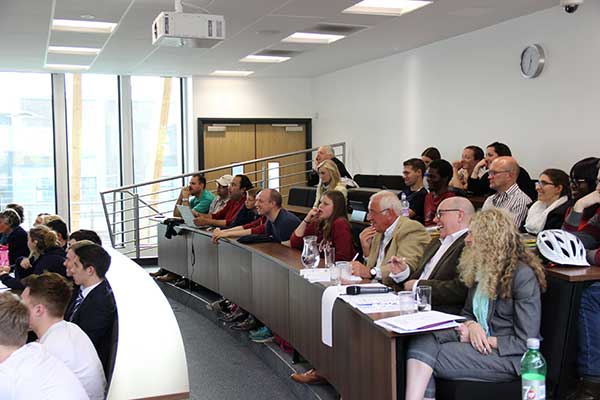 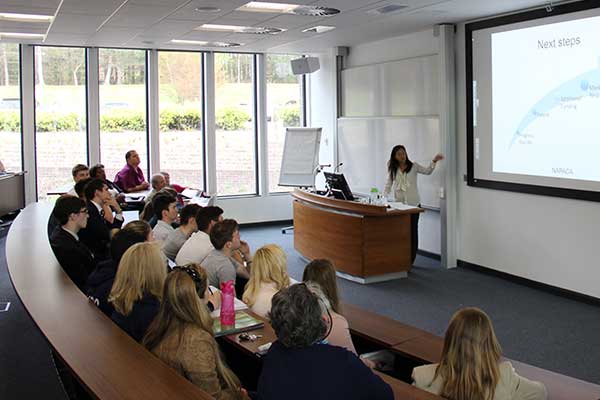 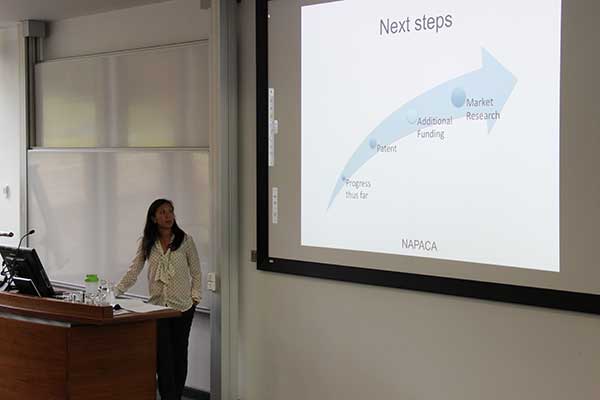 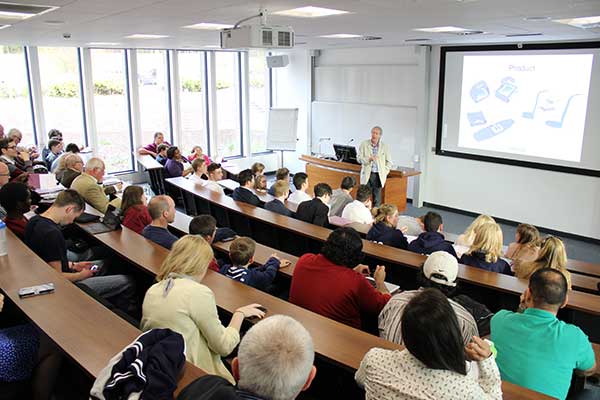 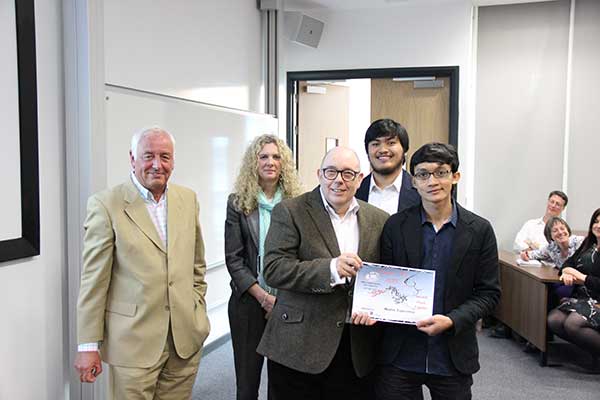 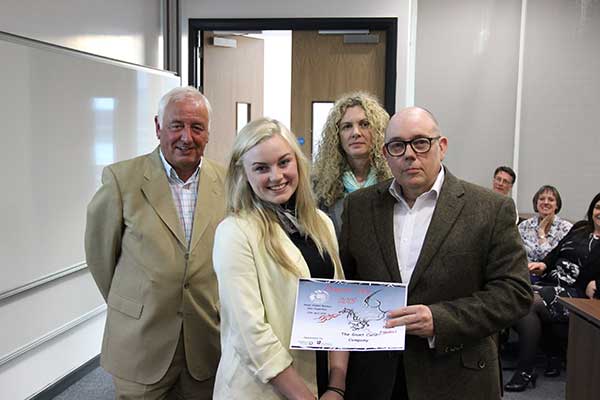 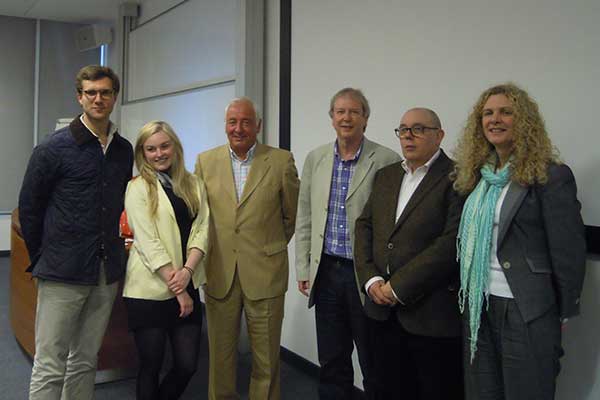 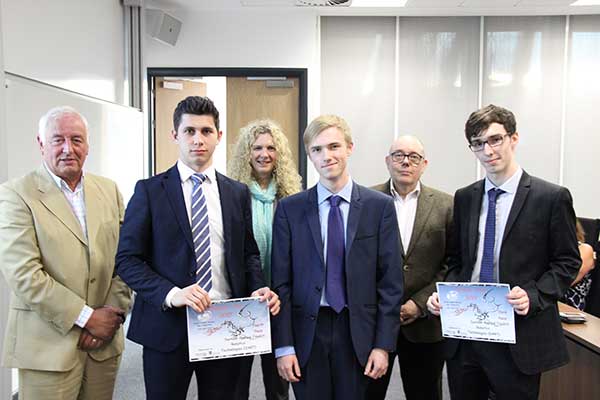 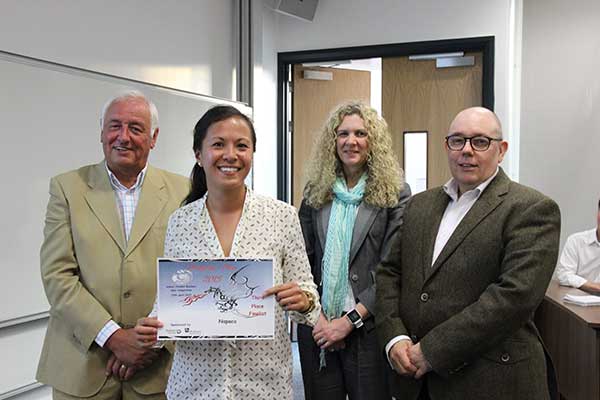 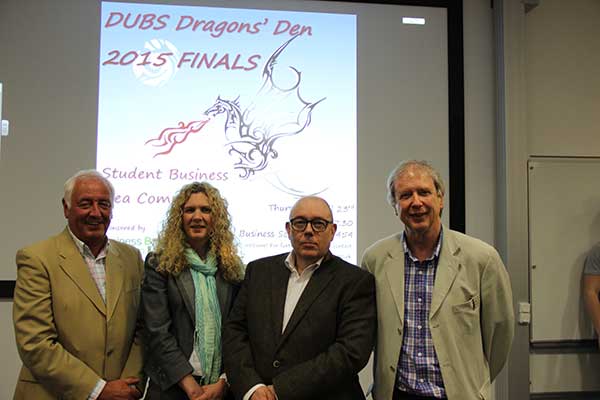 DUBS organises its own version of ‘Dragons’ Den’, the competition where students develop a business idea and pitch to a panel of ‘dragons’. The competition, launched in 2009, has developed into a popular event at DUBS, for student participants and audience alike. Fifteen student teams – undergraduates, postgraduates and students from different subject specialisms and cultural backgrounds - presented their pitches to a group of Dragons (and ‘apprentice’ dragons drawn from among their peers) at the Semi-Finals in March. A variety of project ideas were whittled down to four innovative ones, chosen to compete for the cash prizes in the Dragon’s Den final, held at the Business School on 23 April 2015.

Competition entrants are encouraged to develop their idea and entrepreneurial skills through involvement in the DUBS StartGrid Accelerator, where visiting practitioners and entrepreneurs inform and advise the student teams. Teams shortlisted for the final were offered feedback and extensive one-on-one mentoring by DUBS staff, Honorary Entrepreneurial Fellows and other Alumni.

The Finals attracted an audience of 60-70, including fellow students, academic staff, alumni, and representatives of the Young Business Magnates from local schools. The Dragons’ were alumnus entrepreneurs Graham Smith and Meryl Levington, and Gary Chaplin of Business Durham, the organisation that generously provided sponsorship for the event.

Pitches were made by: Benedict O’Donovan, Jon Strawson and Calem Bond (DART – a drinks mixing and dispensing innovation, suitable for bars, hotels and even children’s parties); Ikram nur-Muharam and Banjaram Indrastomo (The Muslim Experience App); Elizabeth Scarth (The Giant Card Company); and Allison Rubnitz (Napaca – an innovation to help passengers sleep on long haul flights). Each team delivered a 6 minute pitch and then faced interrogation by the Dragons - who were noticeably less aggressive than their TV counterparts!

On the day, the Dragons were especially impressed by Elizabeth Scarth's idea, based around large format greetings cards, who was awarded £700. Second prize (£300) went to the Muslim Experience team.

This competition often features ideas that the students go on to develop as real businesses. Dragons’ Den has been instrumental in motivating students to work seriously to become successful entrepreneurs and participating teams hope to use the learning, and support from the Dragons, to launch their businesses. One participant Allison Rubnitz said: “The competition was tough but the extensive mentoring helped me decide to continue working on my business plan and I now hope to launch my business soon.”