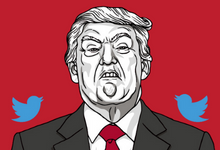 The sentiment of Donald Trump’s tweets affected social distancing in the United States (US) according to new School research. It impacted Republican-voting states and Democrat-voting states in opposite ways.

The former President of the United States famously tweeted a significant amount of Covid-19 related news and opinion throughout the pandemic, which became a source of division in opinion across the US

Professor Michael Guo carried out the study alongside his research colleagues, to understand whether these tweets also impacted US citizens’ risk perception of the pandemic per state, placing specific focus on political ideology.

The researchers reviewed all Covid-19 related tweets posted by Donald Trump and recorded by the Trump Twitter archive for the period of 15 February to 30 December 2020. Using a textual analysis method, the researchers constructed a sentiment measure of Trump’s tweets.

The researchers also reviewed Google’s Covid-19 Community Mobility Reports, showcasing stay-at-home activity from citizens in the US, as well as daily numbers of Covid-19 cases and deaths in each state.

Results of the study

The results demonstrated that tweets and commentary from Donald Trump affected politically red and blue states differently. The tweets’ sentiment negatively affected the public’s tendency to stay at home during the pandemic in 78.6% of Republican counties, but in only 44.7% of Democratic counties.

“Politics in the US has become more polarised, with Democrats and Republicans more ideologically divided than ever. It’s clear this polarisation was evident in the Covid-19 pandemic, and amplified by the former President’s tweets, with the public viewing them via two different political lenses and basing their risk perception on this.” Professor Michael Guo

In a further study, the impact of Donald Trump testing positive for Covid-19 was reviewed. The former President’s subsequent downplaying of the virus after testing positive further increased the partisan divide in social distancing; Republican states reduced their social distancing, whilst Democrat states stuck further to the stay-at-home guidance.

But the former President’s social media activity was not the sole motivation behind citizens’ response to the pandemic. The researchers believe the media landscape was also likely to have impacted risk perception in Democrat and Republican states, with Democrats more likely to watch news channels which criticised Trump’s stance and reiterated the severity of the virus.

Professor Guo believes these results provide a clear illustration of the role of social media in influencing public risk perception during times of crisis, such as the Covid-19 pandemic, and in understanding how the public are likely to react to the messaging of elected officials, saying: “The results hold important implications for public risk perceptions and health-related behaviour. Therefore, it’s important to search for scientific evidence in a pandemic, to prevent politics from overwhelming the science.”