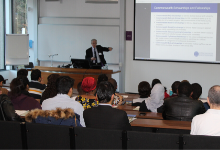 In December 2019, Commonwealth Scholars studying across the UK were invited to attend a commonwealth anniversary event hosted by the School.

The theme of the event was ‘Sustainability’ and Scholars enjoyed a talk by a Commonwealth alumnus, Dr Sakib Amin, who completed his Rutherford Fellowship at the School in 2018 on sustainable energy markets in Bangladesh.

The session then began with Sakib giving an overview of the growing energy and electricity markets in Bangladesh and explained options for generating electricity in Bangladesh since the core reform programmes have taken place. The concept of energy sustainability was introduced, alongside a future roadmap for sustainable energy development.

Commonwealth Scholar attendees were then invited to split into two groups to discuss particular sustainability challenges within their home countries, and fed back these issues to the room, alongside potential solutions. The Scholars were encouraged to reflect upon how their research was directly relevant to particular Sustainable Development Goals and how it will have significant development impact in their home countries.

The day ended with networking over drinks, with many Scholars discussing their research projects and dreams for the future. The anniversary event offered all attendees the opportunity to learn from the experience of others who are working across different areas but share a common purpose to achieve the Sustainable Development Goals.

A version of this news piece, in which CSC also thanked everyone that attended the event and organisers including Dr Laura Marsiliani and Mrs Adriane Horner, can be viewed here.