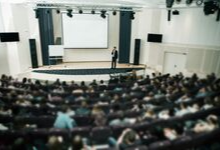 Cooperative game theory often focuses only on the payoff distribution among players under an assumption that the grand coalition is formed whenever the game is super-additive. We implement a laboratory experiment for 3 person cooperative games. In our experiment, the subjects negotiate with each other about both of a payoff distribution and a coalition formation. They can offer not only the grand coalition but 2 person coalitions. Each experimental session consists of 10 super-additive games which are the same as Nash et al. (2012), but the experimental protocol is very different. One-half of the games are balanced, which means they have a non-empty core and the other half do not have the core. Our main findings are as follows. First, the subjects are more likely to form the grand coalition in the balanced games than in the non-balanced games. Second, in the balanced games, larger and larger the core is, more and more frequently they form the grand coalition. Third, the resulting payoff distribution is correlated to his or her quota that represents power in negotiation based on worth of the two-person coalitions. These results are opposite to those of Nash et al. (2012). We also show that the chat window and the order of the games matter a lot.

More about the speaker: