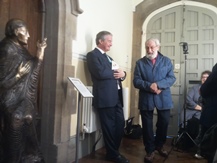 This month saw the unveiling of a bronze statue of the Venerable Bede as part of the countdown to the Lindisfarne Gospels exhibition. The statue – a bronze cast by the internationally renowned sculptor Fenwick Lawson – has been installed at the entrance to Durham University’s Palace Green Library, just yards from the saint’s tomb in Durham Cathedral.

The cast was taken from an earlier piece ‘The Young Bede’ or the ‘Beda-Bede’ which was commissioned for the Pontifical Beda College in Rome by Mgr Andrew Faley, a priest of the Diocese of Hexham and Newcastle. The original was carved from a piece of Chestnut which grew in the precincts of Durham Cathedral. This casting was made by Fonderia Boccea (Rome, Italy).

The project was proposed to the University by staff of Centre for Catholic Studies. University Treasurer, Ms Paulina Lubacz, and University Librarian, Mr Jon Purcell.

Several of his works are now hosted by the University, including the ‘Crucifixion, Resurrection and Ascension’ sculpture hanging in Grey College Chapel and a sculpture of Mary in the chapel of St Mary’s College.

Among the best known of his works is his astonishing life size work The Journey, depicting six monks carrying the body of Cuthbert of Lindisfarne, which was made from elm trees and stands on Holy Island. A bronze casting of this was later made and installed in Millennium Square in Durham city centre.

St Bede, commonly referred to as the Venerable Bede, was an English monk at the twin monasteries of Wearmouth and Jarrow between 673 and 735 AD. One of the Durham University Colleges bears his name – the College of St Hild and St Bede.

Bede was the polymath of his age – a historian, theologian, natural scientist, astronomer and environmentalist and regarded in the Western Church as the last great ‘Father of the Church’. It is therefore appropriate that he should represent learning, research and knowledge in the historic Palace Green Library.

Fenwick’s works also adorns many of the churches in the Diocese and beyond, and he has done much to shape the Catholic cultural imagination in the North East.

Hosting Fenwick and his work were Prof. Paul Murray of the Centre for Catholic Studies, and Mr Jon Purcell, Durham University Librarian.

As Prof Murray explained, “if poetry helps us voice creations praise, then sculpture helps us to see the world with the eyes of the heart. Fenwick’s work combines grandeur of scale with simplicity of form; rugged robustness with sensitive beauty and a transcendence which speaks of God’s presence in the world.”

Jon Purcell closed by noting, “Everyone who visits the Lindisfarne Gospels exhibition will view this bronze statue of Young Bede as part of their experience, we hope that visitors will take time to admire it.”

Fenwick, an honorary graduate of Durham University (2008) also thanked the University. He spoke of the significance of St Bede, a point underlined recently by Pope Francis who has chosen the words of the Venerable Bede as his personal motto and Papal Coat of Arms: “miserando atque eligendo " which means: “Because he saw him through the eyes of mercy and chose him."

Fenwick’s statue is reminder to us all.

The Plaque accompanying the cast of The Venerable Bede reads:

"The 'Young Bede', or the 'Beda Bede', was carved by Fenwick Lawson ARCA for the Pontifical Beda College, Rome from a 150-year-old Chestnut tree which grew in the precincts of Durham Cathedral. The original carving was presented to the College on the Feast of Saint Bede, 25th May 2001. This casting was made by Fonderia Boccea (Rome, Italy), with the generous permission of the President of the Beda College, with a view to being installed on the World Heritage Site in Durham to mark the summer 2013 visit of the Lindisfarne Gospels. It was unveiled on 23rd May 2013."