Dr Anna Rowlands has been the St Hilda Associate Professor of Catholic Social Thought and Practice since September 2017.

Dr Rowlands is author of Towards a Politics of Communion: Catholic Social Teaching in Dark Times (Bloomsbury, forthcoming) and co-editor of the T&T Clark Reader in Political Theology (Bloomsbury, forthcoming). Her current AHRC/ESRC Global Challenges funded research, the Refugee Hosts project, focuses on forced displacement in the Middle East and examines the role that faith and faith-based organisations play in local responses to displacement. She is also working on a project on immigration destitution and detention with the Jesuit Refugee Service.

She is the Founding Chair of the UK Centre for Catholic Social Thought and Practice, which is running a series of expert seminars on ‘contested questions in Catholic social teaching/thought’. Dr Rowlands is spending 20% of her time working directly with practitioner groups including Caritas Social Action Network, CAFOD, Jesuit Refugee Service and Caritas Europa.

Upon her appointment in September 2017, Dr Rowlands said: “I am absolutely delighted to be appointed to this innovative and exciting role. This post requires a dedication to pursuing both cutting-edge research in the Catholic social tradition and a desire to work in partnership with Catholic faith-based organisations that are shaping the next generation of Catholic social practice; a desire to make known the tradition of Catholic social thought as widely as possible at a critical moment for our culture, as well as a commitment to critically examine the development of that same tradition. The questions addressed by the Catholic social tradition – questions of the common good and human dignity – are pressing and urgent for us in local, national and international contexts and the task of the Hilda Chair is to contribute to exploring these questions as a researcher, teacher and through public engagement. I look forward to serving in this role.”

Professor Lewis Ayres, Head of the Department of Theology and Religion, Durham University, said: “Durham University’s Department of Theology and Religion consistently ranks as one of the best departments in its field, not only in the UK but also internationally. One of our great strengths is our ability to combine cutting-edge research with a deep engagement with contemporary church communities.

Professor Paul D. Murray, Dean and Director of the Centre for Catholic Studies, Durham University, said: “Positioned within a leading Department of Theology and Religion in the public academy, the St Hilda Chair in Catholic Social Thought and Practice at Durham University is a unique post. It requires two excellences of the post-holder: excellence in critical-constructive research, and excellence in public engagement across multiple communities. In Dr Anna Rowlands we have an appointee with immense proven capacity in each regard. We now look forward in great confidence to working together to bring this post to full flourishing.” 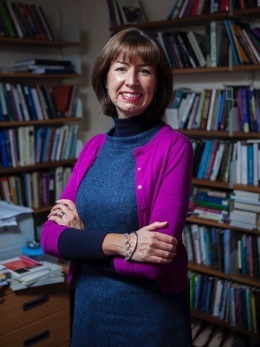