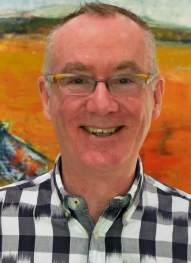 Timothy Jones graduated in Theology and Religious Studies from Leeds University in 1977. He trained as a middle years teacher at St Martin's College, Lancaster and then taught at St George's Church of England Primary School in Chorley Lancashire for six years and at The British School in The Netherlands in The Hague. He went on to teach English as a Foreign Language in Italy, first at International House in Palermo and then for three years with The British Council in Naples.

On returning to the UK, he pursued a career with Standard Life and became a Financial Planning Consultant in Aberdeen before moving back to Edinburgh to work in Customer Relations. Theatre has always been his first love and in 2014 his first play 'Under The Mulberry Tree' was performed at The Festival Theatre's Studio in Edinburgh. His current play is about the final meeting between Paul Tillich and Karl Barth, the two greatest theologians of the twentieth century, which took place in Zurich in 1963. It will be performed as a professional rehearsed reading at St John's College as part of 2015 Michaelmas Term Ruth Etchells Fellow.

The play has already been performed at New College in Edinburgh in June this year and has attracted a great deal of interest and excitement. There are plans for another performance at Union Theological Seminary in New York next year to commemorate the 50th anniversay of Tillich' death.

His many interests include playing the piano, travelling, politics and cooking.