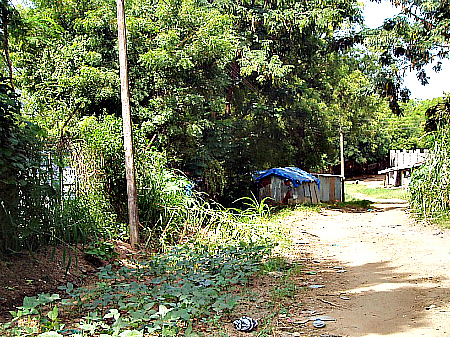 “There is literally nowhere in the world worse than London. Not South Sudan, not Yemen1.” So, there you have it: South Sudan, a thoughtless metaphor for somewhere you don’t want to be2.

The following day I walked past a small corrugated iron hut, with a blue tarpaulin roof. These are a common sight in Juba, but are usually in communal compounds. This one was tucked into waste ground at the side of the track. Whoever lived there had carefully cultivated a narrow strip of earth, and planted beans. They were about a foot high, not yet in flower, but they looked healthy. This, I thought, is what surviving on the margin looks like.

Walking on, I became aware that someone was speaking to me, repeating the same phrase, and sounding steadily more acerbic.

It was a child, stood by the hut, looking at me with a steady gaze. My reply, in English, was too loud, so I backed it up with an apologetic wave. He smiled, and I wished that I spoke Juba Arabic. “Kef?” was all I managed. “Welcome,” he said. Later, I wondered why I had neither heard nor seen him, until he insisted. Perhaps, had I been able to speak Arabic, I would have noticed him sooner.

‘Kowaja’ is what you get called if you are white. It doesn’t mean ‘white’, though; it signifies otherness, in the sense of different and strange. If you counter with ‘Junubi’, it usually raises a smile. I was told that ‘Junubi’, means ‘southerner’, but like kowaja, it has a more subtle sense, of one who is far away.

Between those who are far away, the potential for not seeing is ever present. Knowledge cannot simply be transferred across this gulf. It requires new learning, both to adapt general principle into contextualised practice, and to deal with the asymmetric and cross-cultural dynamics of ‘international development’.

The intended theme for the Association for the Study of Medical Education’s 2017 UK conference is ‘global medical education’. This will provide an opportunity to explore the practical, ethical and educational dilemmas of UK support for global medical education. These are some of the issues that I hope will be discussed: global development as a learning problem (rather than a knowledge and funding problem); the transferability of pedagogy and clinical practice; assuring continued development when support withdraws; and, given the international market in clinicians, who benefits from training doctors in low income countries.

In Juba, the Minister of Health reminds me that Rome was not built in a day. Following Rome’s ancient example, at the Postgraduate Medical Education Centre we are attending to the water supply, improving the buildings and grounds, and have appointed administrative staff. The College of Physicians and Surgeons will soon have control of its own budget, and we are pressing to have accountability for trainees to be transferred from the ministry to the College. In November we welcomed visiting trainers from Northern Ireland, here to give intensive training in obstetrics and neonatal care3. We need more visiting clinicians, to teach and encourage. We are extending our network regionally, towards the medical colleges of east, central and southern Africa, and northwards to Sudan. And in December we will receive 45 graduates from Juba University Medical College to begin Basic Medical Training.

In this respect at least, South Sudan feels like the right place to be.

Dean of Postgraduate Medical Education, and the College of Physicians and Surgeons, South Sudan.

3Dr Paul Weir and a team from Belfast trained two groups of doctors, nurses and midwives in ‘Essential Obstetrics and Newborn Care’.