My habit of mentioning the weather by way of a greeting is usually met with bemusement in Juba; it is always hot. But this time I’m told that it is too hot, and it will rain. Sure enough, over the course of the day, the heat and humidity increase. By late afternoon the sky is a sickly yellow, heavy with moisture. There are a few, large, isolated drops, each one leaving a little crater in the dust, and then the full force of the rain. In seconds, I am wet beyond the possibility of further wetting, the water flowing through my clothes in a warm, steady stream. Potholes in the wide earthen road soon fill. Dry ditches become small rivers, and I see the water flooding through the corrugated-iron shanties that serve as homes. As I pick my way along, a young man leans from the open door of a broken down wagon, and calls on me to join him in the shelter of the cab. I remove my super-saturated hat, glance heavenwards, and decline his offer. He laughs and waves. Getting caught in the rain, like many things in Juba, is an experience that is both familiar, and unfamiliar.

It was after this that I noticed that our new Education Centre, in Juba Teaching Hospital, had been built on low lying ground. On closer inspection it was clear that it received the runoff from much of the rest of the hospital, via two open ditches. The ditches had always been there; I just hadn’t paid them any attention. The Centre was also showing evidence of having stood empty. It needed patching, and a coat of paint. More worryingly, cracks were appearing in the fabric of the buildings.

There is a lot of hope invested in those buildings. The classrooms and library will be the hub of postgraduate medical education in South Sudan. On my last visit they had no power supply. Desks, chairs and IT equipment were still in boxes, sharing the space with piles of rubble and builder’s tools. In the Dean’s office, the watchman’s bedroll lay on the tiled floor, with a few neatly folded belongings.

On the day that I was due to fly home, the phone rang. The Minister of Health was presenting a proposal to Cabinet, to approve the establishment of a College of Physicians and Surgeons for South Sudan; could I attend? Anticipating a ‘Yes’, the car was already on its way. The rush to finish packing, and a fast drive through Juba, were followed by a long wait. When we were finally ushered into the Cabinet meeting, the Minister had just risen to deliver his proposal. The response was wholly positive; the Vice President gave his full support, and there was applause, smiles and acknowledgements. As a demonstration of political commitment to postgraduate medical education, this was hugely encouraging. Practical commitment, as evidenced by the Education Centre, was also positive, but progress here had stalled. There was plenty to think about on the flight home. 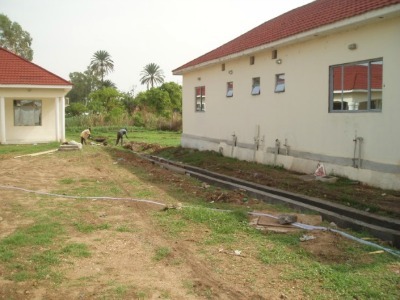 Just five weeks later, back in Juba (still hot), and the Education Centre was transformed. The buildings had been maintained, a power supply installed, the drainage ditches lined and covered. Desks and chairs were out of their boxes; classrooms were equipped with projectors, computers, and audio-visual equipment. There was internet. When I handed over a hard drive containing electronic versions of medical text books, videos and presentations, it was immediately uploaded onto intranet.*

Yet there were still very few books in the library. The remedy, courtesy of the World Health Organisation, arrived in two vehicles. TV reporters had been notified of their delivery, and I made a short speech of thanks, stood in the new library, patting a book for emphasis.

So now we have a College, for educational governance, and an Education Centre, for teaching. There are plenty of patients and clinical conditions for young doctors to treat, and we have a syllabus. But we have yet to acquire the habit of postgraduate medical education.

Formalising the clinical supervision, teaching, and assessment of young doctors means learning new ways of working. We need to believe in education, and trust that learning will get us where we want to be. We need discipline. We need persistence. All of these things, we have to do for ourselves, but we also need support: experienced clinical teachers to help deliver the programme, and as role models and mentors, so that we develop our faculty at the same time as we teach our young doctors.

Despite peace talks, fighting continues between opposition forces and the Government. The economy is oil based, and the price of oil is falling. Inflation stands at around 25%. The situation, although safe on a day to day basis, is fragile. Unsurprisingly, the UK Government advises against all travel to South Sudan. There is a wide UK based support network for medical education in South Sudan, but offering support in these circumstances is not straightforward. The internet will provide a vital link. Working with the medical Royal Colleges, we are arranging to deliver teaching to Juba, via the internet. Some UK based trainers have also continued to visit South Sudan during the recent instability. We intend to build on their example. 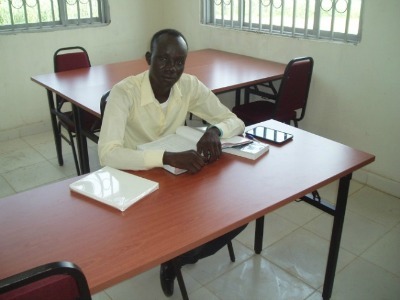 Three days after the books arrived, I looked into the library. It wasn’t open for use. We had not established a library system, and there was only a single member of staff to look after things. I found a young doctor, sitting leafing through a text book. He told me that he had an operation that afternoon, and needed to check up on the procedure. He’d heard that the library had books. I took a photo.

Dean of Postgraduate Medical Education, and the College of Physicians and Surgeons, South Sudan.