A computer simulation of a nanosized knot in the magnetization of a frustrated magnet.

The Skyrmion that models the nucleus of Lithium has the symmetries of a dodecahedron.

A vortex string forming a tangled knot in a simple model of cardiac tissue. The cross-sectional slice reveals the spiral waves of electrical activity that emanate from the vortex string.

Quantum Field Theory provides the foundation for modern physics. It consists of a set of tools that are still being developed in order to describe a quantum theory, the concept of a field and the principle of relativity which are cornerstones of elementary particle physics, but also of nuclear, atomic, condensed matter and astrophysics. It is also inextricably linked to a consistent description of String Theory, and in this context in particular, has led to new bridges between physics and mathematics that we explore within CPT.

String theories are quantum theories where the fundamental object is a one-dimensional string. They offer a consistent, unified and finite quantum description of the gauge forces and gravity. Our research involves perturbative and non-perturbative aspects of string theory, especially recent developments involving branes.

Cosmology is the study of the large scale properties of the universe as a whole, its origin, evolution and fate. The prevailing theory about the origin and evolution of our Universe is the so-called Big Bang theory. We have a particular interest in bold ideas such as extra-dimensions, modified gravity models and superstring cosmology.

Solitons are stable non-singular finite-energy solutions, which appear in a variety of non-linear systems, both classical and quantum. Their stability is often assured by a conserved topological charge. We study models which possess such solitonic solutions, for example models with monopoles, hopfions, skyrmions and vortons. Solitons and related topological objects are often involved in our other areas of research as well. 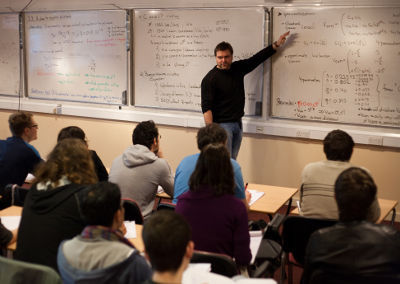 The Centre for Particle Theory is a combined research group in the Mathematics and Physics Departments forming one of the largest particle theory groups in the UK. Both departments accept students for the Ph.D. or M.Sc. degrees. Currently over 50 postgraduate students from around the world are enrolled in the postgraduate programme. Students receive a thorough training in Particle Physics through a mixture of formal lectures and personal supervision.

In the first year, students for the PhD are required to attend the graduate lecture courses, and to take the examinations in January and April, which form part of the first year assessment. Each student will be assigned a supervisory team, who will be responsible for the research programme followed by the student in the remainder of their period of study. The degree is awarded on successful completion of a thesis based on original research. Non UK students may be required to register for the MSc in the first instance and subsequently convert to the PhD, subject to satisfactory progress during the first year.

Visit one of our seminars: