It is widely acknowledged that glacier fluctuations are a reliable indicator of climate change. Recently, much research has focused on glaciers around the world, from small mountain glaciers near the equator to the vast polar ice sheets in Greenland and Antarctica. The emerging picture is that mountain glaciers around the world are undergoing retreat and that this is almost certainly due to rising global temperatures popularly termed 'global warming'. The recent decline in mountain glaciers is of importance for society because in many regions, they play a key role in delivering melt-water for economic, agricultural and domestic use. Of even greater concern, however, is the potential impact on sea level rise, given that more than 100 million people now live at an elevation within 1 metre of sea level. Worryingly, estimates suggest that the contribution of melting glaciers to sea level rise may be increasing.

Many studies have reported increased glacier loss from across the world and the potential impacts of projected climate change have been evaluated including the potential changes in water balance and hazards associated with enhanced glacial melt. Surprisingly absent from this list, are some of the extensive glaciated areas of the Former Soviet Union (FSU). Individual mass balance data exist for some areas but there is a lack of an up-to-date synthesis for the latter part of the twentieth century. More often than not mass balance observations are not supported by detailed meteorological and hydrological observations and detailed projections of future climate change are not available.

The recognition of these gaps in our knowledge of climate-glacier dynamics in the mountains of the FSU instigated this research, which is a multidisciplinary, international project funded by the EU INTAS programme and The Royal Society. 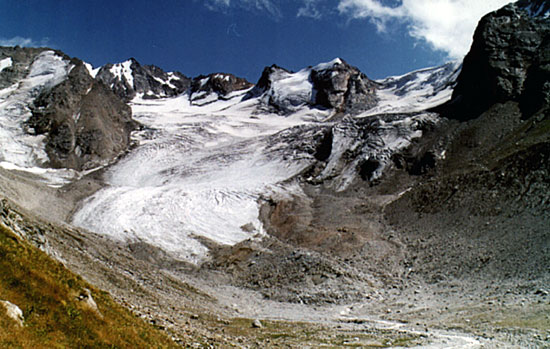