The aim of this project was to determine the millennial-scale variability of George VI Ice Shelf. We used a multi-proxy approach to test the hypothesis that the ice shelf has waxed and waned in response to Holocene climate change. Distinctive lake-ice conveyor deposits and the lithology and biology of bottom sediments from epishelf lakes on the western margin of the ice shelf (such as Moutonnée Lake) indicate periods of former ice-shelf presence or absence throughout the Holocene.

We have achieved our overall aim of understanding the millennial-scale behaviour of George VI Ice Shelf, and have successfully tested the hypothesis that the ice shelf fluctuated in response to Holocene climate change. Our work has demonstrated that the George VI Ice Shelf was absent in the Early Holocene, from ca. 9595–7945 cal yr BP (Bentley et al., 2005). This is a key result because it is the first time that past collapse of a currently extant ice shelf has been demonstrated, and implies that one or both of Early Holocene atmospheric or oceanographic warmth were greater than seen in recent decades. 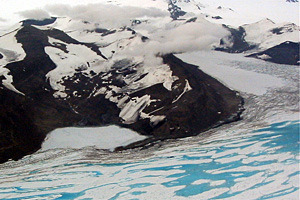 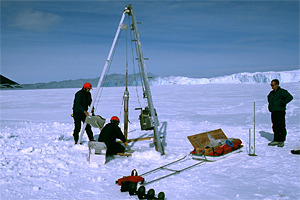 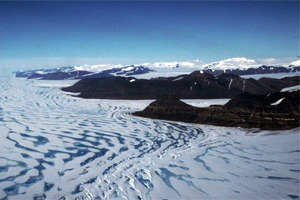