Deglacial History of the Southeast Sector of the Greenland Ice Sheet During the Last Glacial Maximum, The

This NERC funded research project is led by Dr Dave Roberts in collaboration with other colleagues in the department (Professor Antony Long) and from the NERC Cosmogenic Isotope Analysis Facility (Christoph Schnabel; NERC Project No: 9015.0405).

Rapid recent changes to the mass balance of the Greenland Ice Sheet (GIS) may record ice sheet response to global warming, or simply be part of the natural variability of the ice sheet system (Zwally et al., 2002; Howat et al., 2005; Chen et al., 2006; Joughin, 2006; Rignot and Kanagaratnam, 2006; Velicogna and Wahr, 2006). Resolving which of these is correct is important, given the potential of the ice sheet to influence global sea-level change and the climate system more widely. In this respect, an improved understanding of the longer-term changes in ice sheet behaviour since the Last Glacial Maximum (LGM) is essential if we are to understand the internal and external environmental controls that drive ice sheet dynamics.

A number of issues hinder our current understanding of the longer-term dynamics of the GIS. The first is a lack of observational data from many parts of the ice sheet margin. For example, much of the climatically-sensitive southeast sector of the GIS, between Scoresby Sund and Cap Favel, lack any systematic analyses of glacial landforms. The second is the complex and poorly understood response of different sectors of the GIS to climate change (e.g. the terrestrial ice sheet margin, the ice streams and the major fjord systems), each of which may have behaved uniquely (Kelly, 1985; Funder et al., 1998; Long and Roberts, 2003; Roberts and Long, 2005; Weidick et al., 2004). The third is the limited chronology for ice sheet dynamics which presently relies almost completely on radiocarbon dates derived from terrestrial and marine settings (e.g. Bennike and Bjork, 2002; Bennike et al., 2002; Long et al., 2003; Jennings et al. 2006; Cremer et al., 2008). Direct dating of landforms in order to constrain ice sheet history has only just begun to be attempted, despite the high potential of the area for cosmogenic exposure dating (Zreda et al., 1999, Rinterknecht et al., 2005; Sparrenbom et al., 2006; Håkansson et al., 2007).

This research focuses on the southeast sector of the ice sheet, an area that has steep precipitation and temperature gradients, and which is sensitive to climate change because of its close proximity to the North Atlantic (McConnell et al., 2000). The area is currently experiencing rapid changes in mass balance and ice dynamics at low elevations (Krabill et al., 1999, 2004; Krabill and Thomas, 2006; Luckman et al., 2006), although its long-term glacial history is poorly understood. Through the application of surface exposure dating, coupled with geomorphological mapping, we have constrained the magnitude and timing of ice sheet growth and decay during the latter stages of the LGM, and explored the possible driving mechanisms between ice sheet activity and ocean and climate change during deglaciation.

In SE Greenland 26Al and 10Be measurements on abraded bedrock surfaces in terrain above local trimlines yield surface exposure ages of c. 11.8 to 9.9 ka. This demonstrates warm-based glacial erosion of high level surfaces (c. 740 m asl), followed by trimline formation during deglaciation and intense post-glacial weathering. Our work constrains minimum ice thickness during the LGM to at least 740 m and supports a “maximum” ice sheet model in this sector of the GIS. Ice sheet retreat from the continental shelf to the southern edge of Sermilik Fjord is dated to c. 11.1 to 9.7 ka and helps to constrain the timing of the early Holocene retreat of the Helheim Glacier ice stream. Within the Torqulertivit Imiat valley, age determinations from glacially abraded terrain above the local marine limit on the coast (11.1 – 9.7 ka) and those from 10 km up-valley (12.8 – 9.9 ka), suggest rapid surface ablation during these intervals, coincident with rapid atmospheric warming observed in the Greenland ice core records. 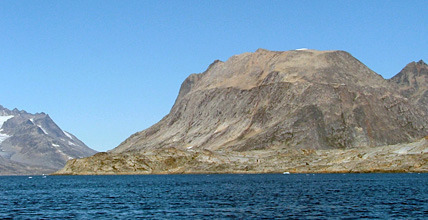 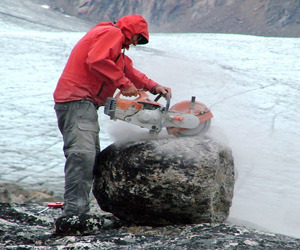