To commemorate the centenary of the Scottish National Antarctic Expedition (1902-1904), Mike Bentley and Dave Evans were members of a scientific party that visited South Georgia in December 2002-February 2003. The 2002-2003 Scotia expedition (named after William Bruce’s original ship) was funded by the Royal Scottish Geographical Society, The Carnegie Trust for the Universities of Scotland, and National Geographic, and involved participants from 6 Universities. The aim was to study environmental changes on South Georgia since the Last Glacial Maximum (c. 18,000 years ago) in order to better understand the pattern of past climate change in the Antarctic region.

The party, led by Dr Jim Hansom and Dr John Gordon, worked from a 21 m aluminium-hulled yacht. The research included a programme of lake and peat coring, glacier surveys, geomorphological mapping, sediment analysis, and study of raised marine features. Fieldwork was concentrated along a number of sites on the NE coast, especially Cumberland Bay. Small field camps were established at key sites, with most work concentrated along the coastal fringe. 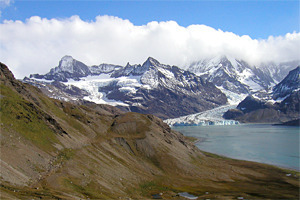 Lateral moraines along the east side of Moraine Fjord