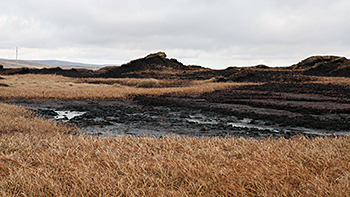 A specially commissioned text by Professor Mike Crang, Head of Department of Geography and member of CVAC (Centre for Visual Arts and Culture) for the exhibition "The Liveliest of Elements, an Ordinary Extraordinary Material" by Laura Harrington.

Laura Harrington is interested in the natural world and how humans understand and interact with it – she works with multiple mediums including film, drawing and installation. A shared interest in upland environments and peat as a lively and dynamic material provided the impetus for a collaboration with physical scientist Dr Jeff Warburton (Department of Geography, Durham University) as part of a Leverhulme Trust Artist Residency. Their collaboration focused on Moss Flats, an upland bare peat flat in the North Pennines. Harrington has evolved this research into an exploration of this dynamic eco-system through moving image, words and sound.

The title of the exhibition is inspired by artist Joseph Beuys who once described a European bog as ‘the liveliest of elements’ and scientist Noel Hobbs who referred to peat as an ‘ordinary extraordinary material’ due to its unusual characteristics and behavior as an earth surface material.

The exhibition includes: The Liveliest of Elements, a new moving image work that explores the nature of Moss Flats through image and sound – the supposed nothingness revealed in its entirety; dis/sonance, a new four channel sound installation consisting of five voices recorded at Moss Flats – aiming to capture the movement and rawness present on the surface of the site, translated through the most primitive and paired down instrument we have – the human voice; and Haggs and High Places, an artist's book published by New Writing North as part of the Durham Book Festival 2015 – providing an insight into the research and ideas behind the exhibition and including contributions by Jeff Warburton and new writing by poet and shepherd Josephine Dickinson.