Innovative techniques for reconstructing past sea levels have been used to compile a comprehensive database of UK sea-level change as well as developing an improved model of vertical land movement. Together these underpin the sea-level component of the UKCP09 climate modelling tool, and thereby inform a wide range of coastal planning and management activities around the UK. Methodological advances have also been applied to work on coastal stability at existing and proposed sites for nuclear power stations and nuclear waste repositories in England and Sweden.

Whether the shoreline is advancing, retreating or stable at a particular location depends on the balance between two factors: the total volume of water in Earth’s oceans (‘glacio-eustatic’ sea-level change) and the fact that the land may itself be rising or falling (due to ‘glacial isostatic adjustment’, or GIA). Because of this different parts of Britain, for example, have distinct sea-level histories and different rates of modern sea-level change. Durham researchers have made major contributions to documenting the interplay of these factors, particularly around the British Isles, and also to modelling GIA.

Durham researchers have developed and exploited new sea-level reconstruction techniques, leading to a pioneering high-quality database of UK sea-level data and reconstructions of shoreline evolution at local (site-specific), regional, and national scales. This work has unlocked new and previously-unavailable archives of sea-level change, and it has disentangled global glacio-eustatic sea-level change from critical regional and local factors such as GIA, land lowering caused by sediment compaction, variations in sediment supply and, more recently, human impacts. It has also identified rates and patterns of past coastline change that provide plausible scenarios for future evolution.

Concurrently, an improved GIA model has been developed, incorporating work by Durham, to account explicitly for the 3-D variability of the Earth’s internal structure, which has been shown to affect the rates of both vertical and horizontal land motions, and thus predicted rates of sea-level change. The comparison of model predictions with field evidence has resulted in improved estimates of Earth model parameters that influence GIA, including lithospheric thickness and the viscosity profile of the Earth’s interior, while state-of-the-art ice sheet dimensions and retreat history have been incorporated into the GIA model framework. The resultant model has been used to produce spatially-comprehensive estimates of relative land and sea-level change for the UK and adjacent areas. 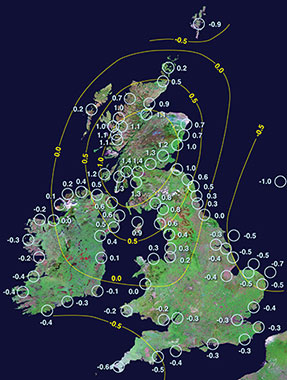 Durham research underpins how future sea-level rise is predicted within the UK Government’s climate projection modelling tool, UKCP09. The sea-level component uses our model of GIA with data on past sea level to generate vertical land velocities, which are then combined with global sea-level change scenarios from the Intergovernmental Panel on Climate Change to estimate ranges of future relative sea-level rise at any point in Britain and Ireland. The sea-level component has at least two major nationwide applications: