Research into nanotechnology and geoengineering by Macnaghten has worked with publics to explore the complexity of societal concerns about new and emerging technologies. The subsequent development of the Owen / Macnaghten framework on responsible innovation has informed more deliberative approaches to governing science and technology, both at the European level and in the UK, where it is currently being operationalised by the UK's Engineering and Physical Science Research Council (EPSRC).

In decisions about the funding of research in science and technology, the societal acceptability of the proposed research has often been a relatively neglected issue. A recent example where such projects have become controversial is research surrounding the introduction of new forms of genetically-modified crops and foods in the UK. Such controversies have led major funding agencies to consider how their governance or procedures could be modified to take better account of possible societal concerns when making and implementing funding decisions. Durham research has played a key role in identifying why current approaches to the governance of emergent technologies are problematic. Through a number of projects and collaborations (notably the DEEPEN project on the ethical challenges posed by emergent nanotechnologies) we have developed deliberative processes that aim to embed ethical and societal considerations throughout all stages of scientific practice. Drawing on this research we have established the AIRR framework comprising four integrated dimensions: 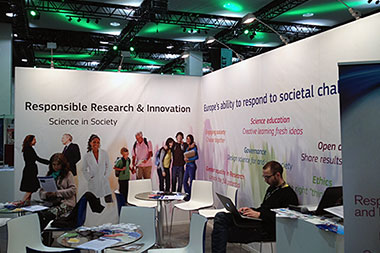 The AIRR framework for responsible innovation was first trialled in relation to the Stratospheric Particle Injection for Climate Engineering (SPICE) project, funded as part of RCUK's support for investigations into the potential of geoengineering as an additional response to global warming. SPICE aimed ultimately to investigate the feasibility of solar radiation management by delivering large quantities of sulphate aerosol (and other particulate options) to the stratosphere to mimic the cooling effects of volcanic eruptions. In the first instance a test was proposed of a one-twentieth scale delivery system: a 1km high hose supported by a tethered balloon.

Macnaghten was invited by EPSRC to chair the stage-gate panel set up by the Research Councils to provide a recommendation on whether the testbed should proceed and, of so, under what conditions. As part of a model of innovation governance the SPICE team was asked to anticipate, reflect, and deliberate with publics and stakeholders on the purposes and possible impacts of the research and what it could lead to. In the event, the test-bed experiment became highly symbolic as the UK's first field trial of a technology with solar radiation management potential. A vocal media debate ensued in the following three months, with polarised views about geoengineering as a response to global climate change. Following consultation and deliberation with the stage-gate panel, EPSRC took the decision to first delay and then withdraw the experiment in May 2012.