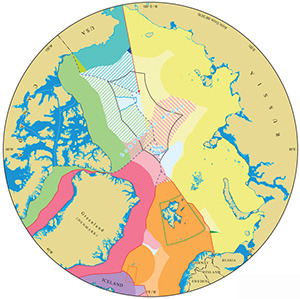 Outer Continental Shelf claims are filed with the Commission on the Limits of the Continental Shelf, an international scientific body that assesses the geological and bathymetric data that countries use to assert claims to the non-living resources of the seabed beyond 200 nautical miles from shore. These claims follow procedures detailed in the United Nations Convention on the Law of the Sea.

Russia's 2001 claim, which designated 1,325,000 square kilometres of international seabed as an extension of the Russian landmass, was returned in 2002. The Commission requested more detailed evidence to support the Russian claim.

Martin Pratt, Director of Bordermap and former Research Director of IBRU designed the new map with support from IBRU and Durham University's Cartographic Unit. Comparing the 2001 and 2015 claims, Pratt noted, "For the most part, the new Russian filing reproduces the claims first asserted in 2001, but with much more detailed evidence. However, Russia extends the limits of claims in two areas and retracts them in a third, based on the new data that their scientists have gathered. As a result, Russia has added 103,000 square kilometres to its claim, roughly equivalent to the land-area of Iceland".

Professor Phil Steinberg, Director of IBRU, added, "In filing this claim, Russia is engaging in a process that Norway and Denmark have already followed in the Arctic, that Canada is preparing to follow, and that dozens of other countries have followed in oceans around the world. Far from being a unilateral acquisition of territory, Russia is joining the world community in following the rule of law in using scientific data to assert limited economic rights to portions of the international seabed".

Steinberg added, "Once all Arctic submissions are complete, there likely will be considerable overlap in the claimed sea beds of Denmark (through Greenland), Russia, and Canada, including at the North Pole. At that point, a legal process will be instituted to sort through and divide those claims. However, all indications are that the process will be peaceful and orderly".

The map of Russian claims and the original Arctic map, updated with all the submitted claims and potential claims, are both available from the IBRU website.