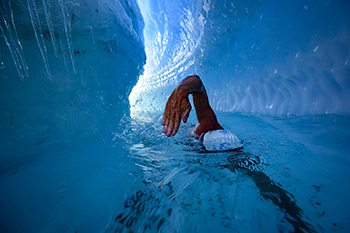 Our glaciologists have been working with the Lewis Pugh Foundation over the last few weeks, as Lewis prepares to swim where no human has swum before.

Today (January 23rd, 2020) Lewis plans to swim one kilometre across a supra-glacial lake in East Antarctica to highlight the impact of climate change and increase protection for our oceans.

Supra-glacial lakes form when meltwater collects on the surface of an ice sheet and recent work in Greenland has shown a clear link between climate warming and the development of lakes.

We also know that some of these lakes can drain though the ice, fracturing apart floating ice shelves and causing the inland ice to speed-up.

Until recently, though, we didn’t known how many supra-glacial lakes were forming in East Antarctica.

This was the aim of a recent study where we looked at five million square kilometres of satellite imagery to map the extent of lakes around the entire margin of the world’s largest ice sheet in East Antarctica.

Lead author Professor Chris Stokes, said: “We’ve known for some time that lakes are forming in East Antarctica, but we were surprised at quite how many had formed and all around the ice sheet margin.

"The density of lakes in some regions is similar to the densities we’ve observed on the Greenland Ice Sheet and on the Antarctic Peninsula, which are generally viewed as much warmer."

Lewis will attempt to swim in one of the lakes mapped by our team in a region known as Dronning Maud Land.

This is part of his ongoing mission to ensure environmental justice for our oceans and to protect them from human abuse and exploitation.

Lewis has pioneered a particular brand of environmental diplomacy that uses the unifying power of sport to bridge divides and create a climate for negotiation and understanding amongst global leaders and policy makers.

PhD student Jennifer Arthur is currently working on a project aimed at understanding the precise conditions that lead to the formation and drainage of supraglacial lakes and has been studying the region where Lewis will swim, which is around 50m above sea level, and 50 - 60km inland from the coast.

Jennifer said: "Lewis will be swimming in one of hundreds of lakes in this region that form each summer where the ice flowing from inland begins to float and form a vast ice shelf. Our observations show that the ice is around 400 - 450 metres thick and some nearby glaciers are flowing up to 130 metres per year, meaning that the lakes themselves are being carried along at the surface of the ice sheet towards the coast.

"This is a really dynamic environment, with lakes periodically draining and forming rivers that carry the meltwater across the ice surface, but which can also cut down into the ice."

Remarkably, Jennifer can acquire satellite observations of the ice sheet about every six days and she uses these observations to measure not just lake locations and areas, but also their volumes.

"Our latest measurements indicate that Lewis has chosen to swim in a region where lakes range in size from 100m to 4,700m long and from 50m to 3,500m wide, covering a combined area of around 100 kilometres squared.

We wish Lewis all the best in his remarkable feat!