The disappearance of the moss Sphagnum imbricatum from Butterburn Flow, Border Mires Special Area of Conservation 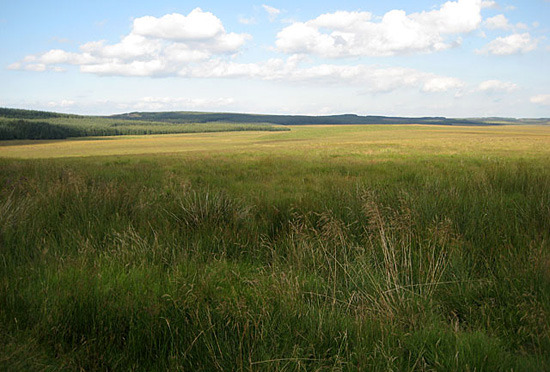 This work tackled a long-standing question about the recent evolution of peatland vegetation assemblages in northern England. A number of previous workers had identified that the moss species Sphagnum imbricatum had disappeared abruptly from many different European bogs some time between AD 1030 and AD 1730. The disappearance was dramatic: previously this moss had dominated many peatlands, and had resisted large variations in climate and environmental change. Why then did it disappear so quickly at so many sites?

This work involved an analysis of peat cores taken from Butterburn Flow, in the Border Mires Special Area of Conservation. Alongside traditional methods of analysis (preserved remains of Sphagnum and sedges; assemblages of water-depth sensitive testate amobae; pollen analysis of regional vegetation) we employed a new suite of chemical methods (biomarkers) to identify changes in vegetation assemblage, peatland water depth, and potential records of changing nutrient inputs. Our data suggest that changing nutrient inputs due to agricultural activity and a rapidly rising water table on the bog combined to drive the disappearance of Sphagnum imbricatum at this site.