This page outlines my research aimed at understanding the long-term landscape evolution of Antarctica. 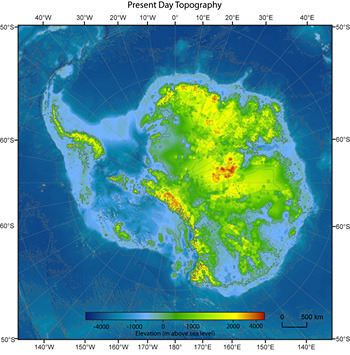 Figure 1: This is a map of Antarctica's subglacial topography (data from BEDMAP) showing the contrast between rugged coastal landscapes and smooth interior bed conditions.

However, the nature and patterns of long-term landscape evolution, particularly via glacial erosion, across the continent is largely unknown. This is partly due to the paucity of evidence from the interior and partly because significant glaciation was initiated in Antarctica around 34 million years ago. Ice-free areas and offshore evidence have been used in combination with numerical models to understand the behaviour of the Antarctic Ice Sheets over this time. Despite this, the link between ice sheet fluctuations and landscape evolution has not previously been made on a continental scale. Understanding the evolution of the landscape of Antarctica gives insight into the long-term ice sheet stability and the interaction with (and feedbacks between) the ice and the evolving landscape. By understanding the relationships between the geomorphology of the buried landscape and the evolving temperature regime of the ice sheets in the past it is possible to generate hypotheses relating to patterns of initial ice sheet growth in the interior of Antarctica, and to the long-term dynamics of the ice sheet. 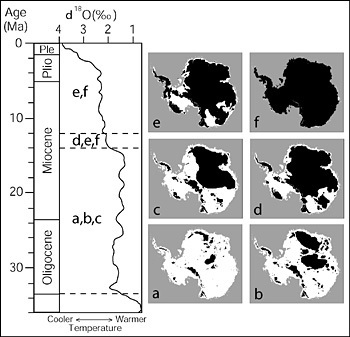 Figure 2: Potential scales of ice mass in Antarctica over the past 34 million years (Jamieson et al., 2010).

We investigated the evolution of the subglacial landscape of Antarctica using an ice sheet and erosion model (Jamieson and Sugden, 2008; Jamieson et al., 2010). As figure 2 shows, we identify different scales of glaciation that may have existed in Antarctica, ranging from local ice under a climate like Patagonia today, to regional and then continental ice sheet coverage under increasingly cold and dry conditions.

This animation shows the range of stepped ice sheet scales used in the experiment. This does not represent a 'history' of ice sheet growth, but indicates the range of scales of ice mass that may have existed on Antarctica. Note the 'holes' in the larger ice sheets are the result of calving 100% of ice when floatation is reached. Future simulations will rectify this.

Our results suggest that much of the Antarctic interior may have been subject to less than 200 m of erosion. The depth of erosion reflects the presence or absence of warm-based ice and the consistency of ice flow direction. We suggest that much of the lowland interior resembles the landscapes of areal scouring typical of the Laurentian and Scandinavian shields. However, near the continental margins selective linear erosion has overdeepened pre-existing river valleys by as much as 2.8km. High elevation plateaus adjacent to such drainage systems have survived largely unmodified under cold-based ice. Mountain regions such as the Gamburtsev Mountains in central East Antarctica, uplands in Dronning Maud Land and massifs in West Antarctica are likely to bear features of local alpine glaciation. Such landscapes may have been protected under cold-based ice for the last 34 Myrs or possibly longer. 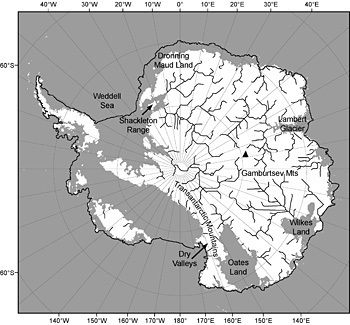 Data from this, and earlier models have been used to 'backstack' or restore sediment to the bed landscape of Antarctica to understand how the landscape may have appeared prior to the growth of the Antarctic Ice Sheet around 34 Million Years ago (Jamieson et al., 2005; Wilson et al., 2012). As figure 3 shows, we suggest that a large scale river network has survived under the ice sheet throughout this time, and that this network and associated tectonic features have strongly controlled patterns of ice flow and erosion in Antarctica throughout its glaciated history. 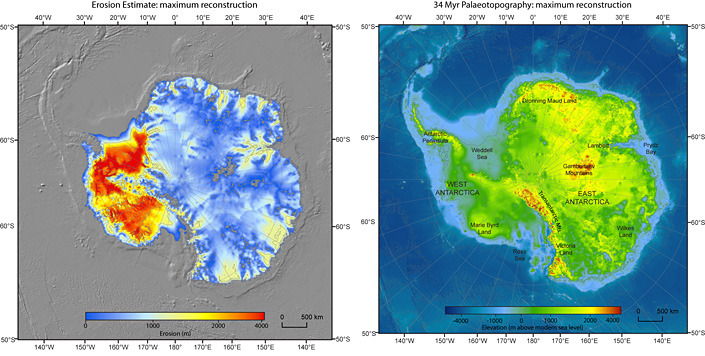 As part of the ANTscape project, we showed that although the East Antarctic landscape has evolved surprisingly little, West Antarctica used to be significantly higher and has since been eroded to below sea level by the fast-flowing ice. Figure 4a shows the pattern of erosion inferred from modelling constrained by offshore sediment volume data, and figure 4b presents the resulting reconstruction of past topography at 34 Million years ago (Wilson et al., 2011). This work will be used to constrain computer simulations of ice sheet and climate interactions at this time (the Eocene-Oligocene climate boundary) so we can better understand how glaciation began in Antarctica.

Publications associated with this and my other work are listed below and on my home page.